There’s lots of reasons to start commuting, but at the end of the day one of the main reasons is that it’s fun. Why take the subway or drive a car when you can pedal outside? Today we’re highlighting Jacqueline who understands this sentiment. She’s a bike commuter in New York City who has been commuting for years now. Enjoy reading her insights, experiences, and advice on bike commuting in New York City. 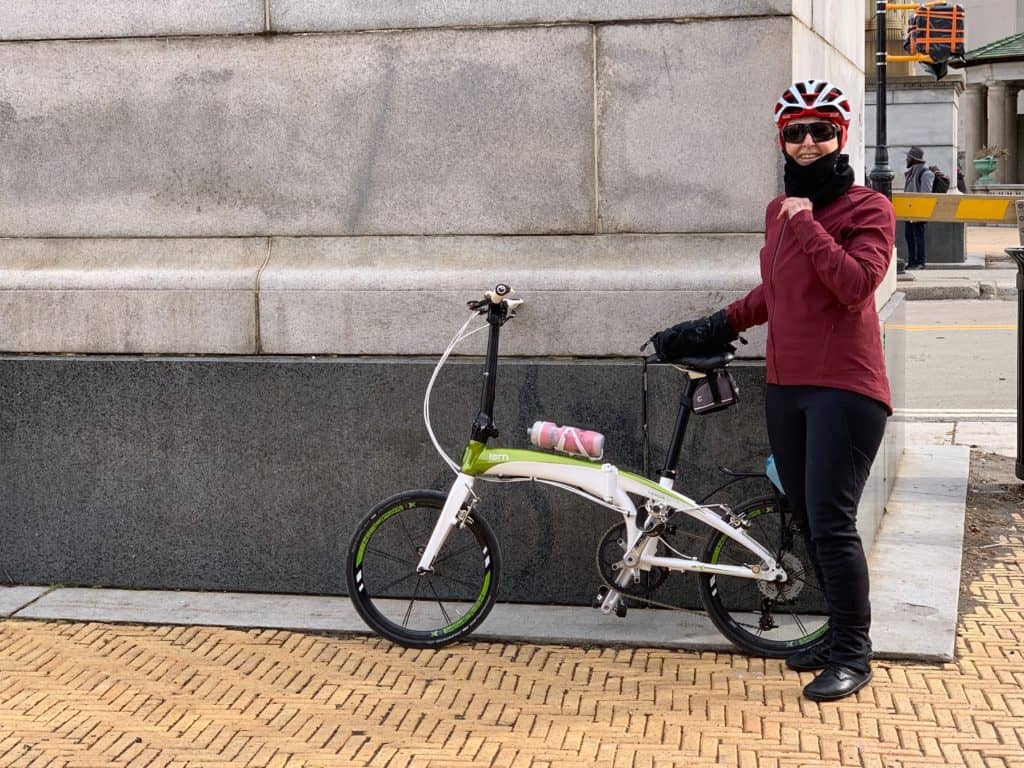 Commute Distance: Varies (2 – 20 miles) depending on my destination. I commute for work and any appointments I have to get to as well as shopping.

What got you started?

Any stories from your commute? I had run-ins with cars that disrupted both my bike riding and my work for about six months each. The second time I was hit by a driver turning left who didn’t look past the truck she was turning in front of and ran into me as I was crossing an intersection in the bike lane. Luckily, I was thrown clear of the car and there were witnesses. I broke a bone in my hand and had a hairline fracture in my groin. An operation on my hand and physical therapy for my hip took care of that.

Last month I had two notable incidents, I was riding home on a local street with a shared road that had cars parked on both sides, so I was in the center of the street and there was a stop light at the end. A driver came up behind me and honked at me all the way down the block to move over, which I didn’t do because of safety. At the end of the block, he had to stop for a light, and I moved up to the corner to wait to turn onto a bike lane.

Last week I was just riding home from a local bike shop and was in in the middle of the one lane on a main neighborhood street with the other lane filled with double parked trucks and cars. There were cars behind me (of course, but they were being pretty patient. This man in a suit, j-walking illegally across the four lane congested street, yelled at me – “get out of the road, there are cars behind you, idiot.” I am not sure who the idiot was, but I kept going and ignored him.

What is one thing you wish you knew before starting to bike commute? I didn’t realize how many male bike commuters are so competitive. I also didn’t expect drivers to be so hostile towards cyclists.

What Kind of Bike & Where did You Get it? I have had a number of bikes to commute with.

What gear do you routinely carry for your commute? I wear clothing for whatever activity I am doing and don’t bring a change of clothing. If it rains while I am out, I usually hop on a subway to come home. I don’t tend to ride when it’s raining, although I do have rain gear. It took a couple of years to get the gear to ride in the winter – I have a winter helmet (Smith), lobster claw gloves, ski goggles, and barrier pants for wind protection.

I also use a lot of blinky lights – back of the bike, on my helmet, strapped to my ankles. My philosophy is to be as visible as possible. I have a couple of hi-viz vests. I always wear sunglasses that are transition so that I can see at night if necessary. I am more worried about something flying into my eyes than the dark. I also use a rear view mirror – the one I use attaches to my forearm.

I carry a Po Campo trunk bag that is like a large handbag. It has Velcro straps that quickly attach it to my luggage rack. It also has hand and shoulder straps and looks like a large purse when I take it off. When I have to carry more stuff, like equipment for my clients, I use a pannier or two.

Anything else you’d like to share about bike commuting? In New York City you have to develop confidence and constant awareness to get comfortable commuting by bike. I believe it’s a great way to keep my cognitive ability sharp. It can be easy to get angry at the way you’re treated on the road, but I find it a good challenge to remain calm and keep a sense of humor. Making eye contact with drivers often helps.

The city is creating bike lanes regularly, but they are often not protected, are blocked by parked cars or trucks, or even construction. Buses routinely speed in front of you to stop in the bike lane to pick up passengers.

A Tern Link D7 (maybe 8?) that Jacqueline used for awhile. 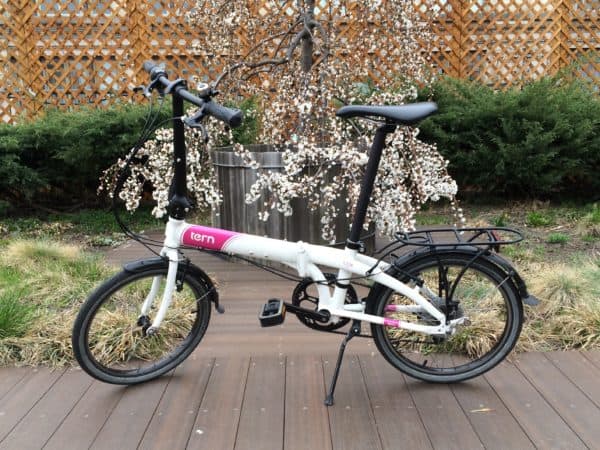 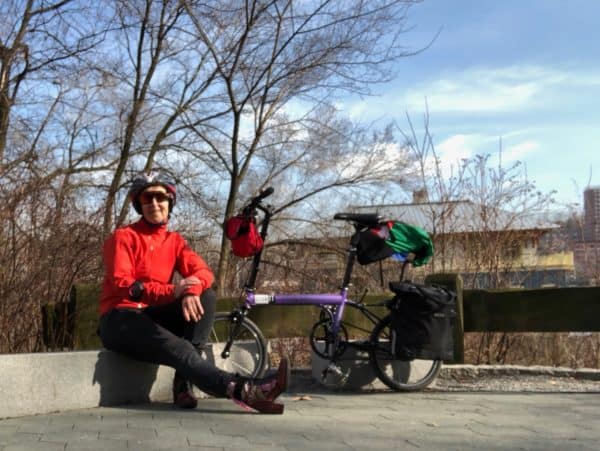 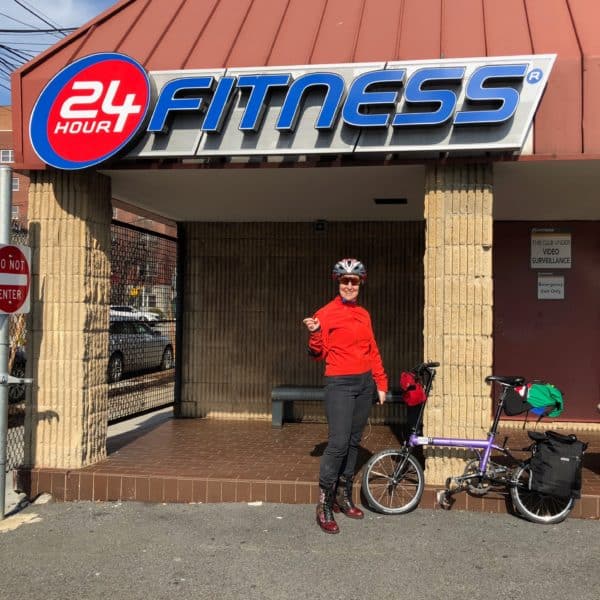 The Jamis Bike she won from a raffle! Rode as a commuter until February 2019 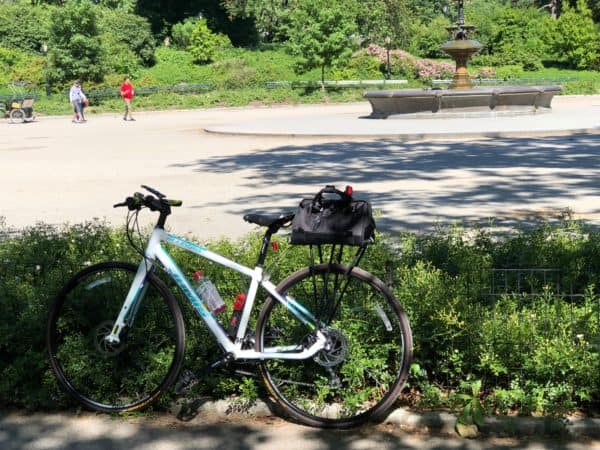 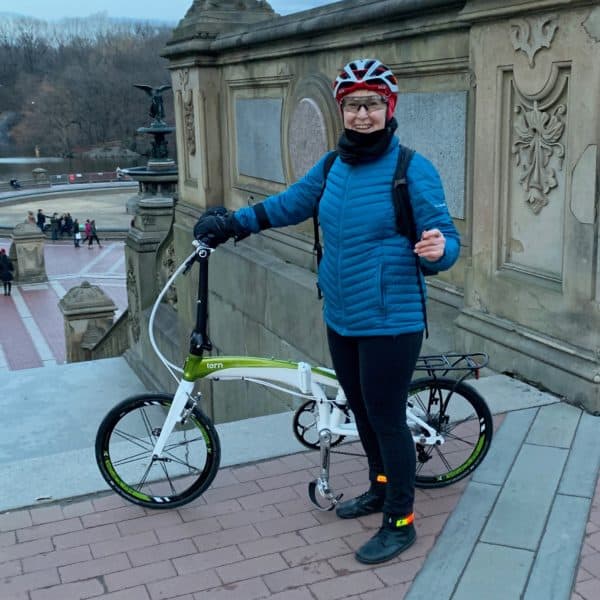 If you’ve been inspired by this highlight of Jacqueline – the time to start is now! Give bike commuting a shot! If you’re thinking about riding a bike in NYC then check out these helpful tips for riding in the city.