New York City is a city in a league of its own. The city is alive with people, events, things to do, food, and more.

While visiting New York City I loved to ride around the city by bicycle. Not only was it often faster to ride by bike than waiting for the subway, but it allowed me to experience the city.

After my trip I reached out to veteran New Yorkers who regularly bicycle in the city. I wanted to know what advice or tips they could give to new bike commuters in their city.

This article is a summary of their responses. Here are 18 tips for cycling in New York City. 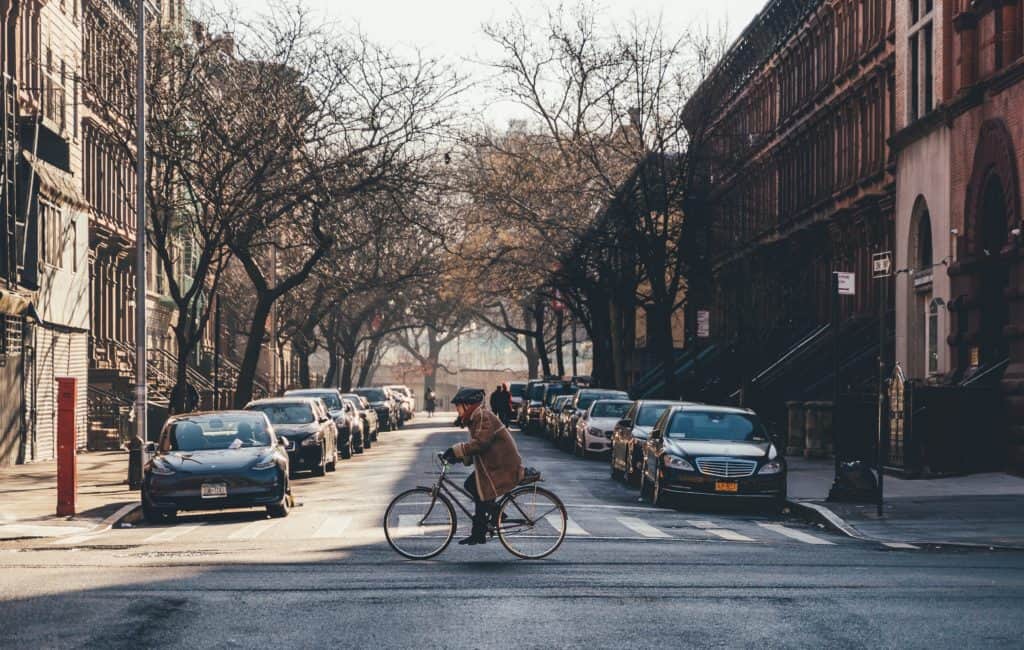 This can be overwhelming for a new cyclist in the city, and that’s why it is important to keep your eyes scanning everywhere.

You’ll need to have a heightened awareness of your surroundings on your bike to make sure you don’t ride into something or to avoid being crashed into. Keep focused and avoid tunnel vision. Use your eyes to scan your surroundings.

The streets of New York City are noisy, and there will be times when you need to make yourself known.

It could be a car merging into you or a pedestrian about to step in front of you. You are going to need to make noise to get their attention.

Don’t be afraid to loudly proclaim your presence. If you’re soft spoken it could lead to a disaster.

In addition, you can get a loud bell to ding as you pedal through the city. You can view our bike bell recommendations here.

Ride with the expectation that every pedestrian is completely unaware of your presence. Unless you make direct eye contact with them assume that they don’t see you.

Riding through the city with this assumption will save you from an accident.

This correlates with tip #1. There’s so much going on in the city that you don’t want to be squinting or getting anything in your eyes while riding.

You need to keep those eyes open fully so you can see what’s around you. If you don’t wear prescription glasses, you should wear a pair of sunglasses or safety glasses.

The less times you need to fix a flat tire on the streets of NYC the better. Many bike commuters consider puncture resistant tires as mandatory.

Go to your local bike shop, and get yourself a pair. Personally I’m a fan of the Continental Gatorskins (see on Amazon) as they worked well on my bike ride from central California to Mexico.

6. Know how to Fix a Flat Tire

Make sure you have the tools to do so, and I would recommend giving it a try BEFORE you have a flat. Just do a practice run at home.

While cycling in New York City you should carry all the tools to fix a flat tire. This includes tire levers, new tube, patch kit, and a bike pump (or Co2 cartridge).

7. The Relationship between Cyclists and the Cops in NYC

If you talk with any longtime bicyclist in New York City than you’re bound to hear their thoughts on the police.

The cops and cyclists of New York City have a complicated relationship.

Some claim that the cops are enemies of cyclists, while others say the police are only doing their job of enforcing the law.

You can make your own opinion, but here’s an article that highlights part of the problem between the two groups. All this to say, make sure you know the law and that you are following the rules while bicycling in New York City.

8. Take the Lane if You Need It

Cars will honk. Drivers may get upset, but take the car lane if you need it.

9. The Brooklyn Bridge is Packed

Unless you’re riding in the early hours of the morning you should avoid the Brooklyn Bridge.

The bridge always has pedestrians walking in the bike lane, and even with a bell you’ll have a hard time getting over it quickly. It’s worth the time to go the extra distance to Manhattan Bridge.

10. Familiarize yourself with the Bike Map

There’s an official bike map for the city.

There’s three ways to get it. Go to the official website here to order one or for instructions to download an APP on your phone that provides the map.

Lastly, you can visit a local NYC bike shop and pick up a copy for free.

11. Get Lights that are easily removed

You’ll want to equip your bike with rear and front lights, and turn them on at dusk, dawn, and at night. The lights will make you extra visible.

While shopping for lights make sure to purchase some that are easily to remove if you’re planning on locking your bike on the street. Anything that’s not locked onto your bike will be stolen.

12. Register Your Bike at the Local Precinct

The police have different programs set in place to prevent bike theft and also to recover stolen bikes. You can read about these programs here.

It is recommended that you register your bike at the local precinct so that if it’s stolen there’s a better chance that it will get it back to you if its found by the police. Also if your bike did get stolen you can read this article for ideas on how to get it back!

Not long ago I wrote down 24 safety tips that apply to all bike commuters.

The number one tip that applies to cycling in NYC is to wear a helmet. The streets are busy out there, and your head will thank you if you find yourself in an accident.

As an additional word of caution, watch out for car doors being thrown open. It’s smart to keep at least 3 feet away from parked cars to avoid doors.

14. Have at least Two Quality Locks for Security

Unfortunately there are thieves who want your bike in NYC. You need at least two solid locks to keep your bike secure in the city. You can use one for your wheel and frame.

The second lock can be used for your second wheel. Honestly it wouldn’t hurt to have a thick cable to keep everything extra secure. If you’re locking it to something on the street you want to make sure it’s to a heavy, thick, immobile, metal object.

Look into the Kryptonite New York Fahgettaboudit Mini (Buy on Amazon) or an Abus Granit Lock (check price on Amazon). 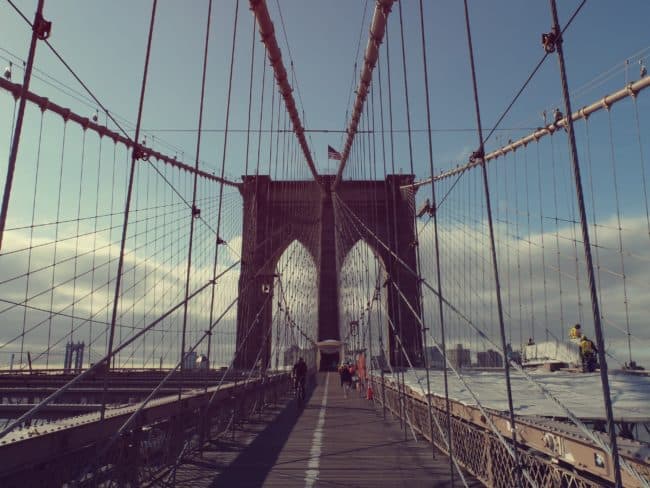 15. Don’t ride on the sidewalk

It’s against the law, and you can be ticketed for riding on the sidewalk. If you’re uncomfortable riding in the street than you may need to reconsider bicycling in NYC until you gain more experience riding on the road.

16. Ride with the flow of traffic

Don’t ride against the flow of traffic. It’s dangerous, because cars and pedestrians will have less time to react to you. Also it is illegal.

It’s a pain to take your bike on the subway, but you should have a metro card (or the money for one) while riding just in case. Perhaps you get a pesky flat tire and it’s too cold to change.

Maybe your bike breaks down and you need to make sure not to be late to work. There are a variety of reasons why you may need to jump on the subway with your bike.

Bikes are allowed on the subways, but they can be burdensome during rush hours when there’s lot of people on the subway. Still you should carry a metro card just in case of an emergency.

18. Have fun bicycling in the city!

You’re outside riding your bike in New York City! Go slow enjoying the sights, sounds, and smells of the city. New York City is a fantastic place to be, and you’re able to enjoy it from the saddle of a bike.

Whether you’re a tourist bicycling in the city for a day or a bike commuter you’re fortunate to have this opportunity. Keep safe out there and happy pedaling!