Are you thinking about starting to bike commute, but unsure of what bike to get? Perhaps you already own a mountain bike or are thinking about getting one.

As an avid bike commuter and cyclist, here’s what you need to know about bike commuting with a mountain bike.

Mountain bikes make fun commuter bikes, because of their suspension. Potholes, broken streets, dirt are no problem for those who commute on a mountain bike.

You can fly off the curb and have suspension take the blow. Mountain bikes are designed to take a beating in any weather and be rigged with racks, panniers, and fenders. Commuters can feel secure riding on a mountain bike in any weather condition.

With this said, the biggest downside of a mountain bike is speed. For a number of reasons (weight, rider’s position, suspension) riding a mountain bike will be slower compared to a road bike, cyclocross bike, and even some hybrids.

Is riding a mountain bike as a commuter the right decision for you?

In this article, I’ll dig into the pros and cons of using a mountain bike as a commuter and you can decide whether it’s worth commuting with or not. 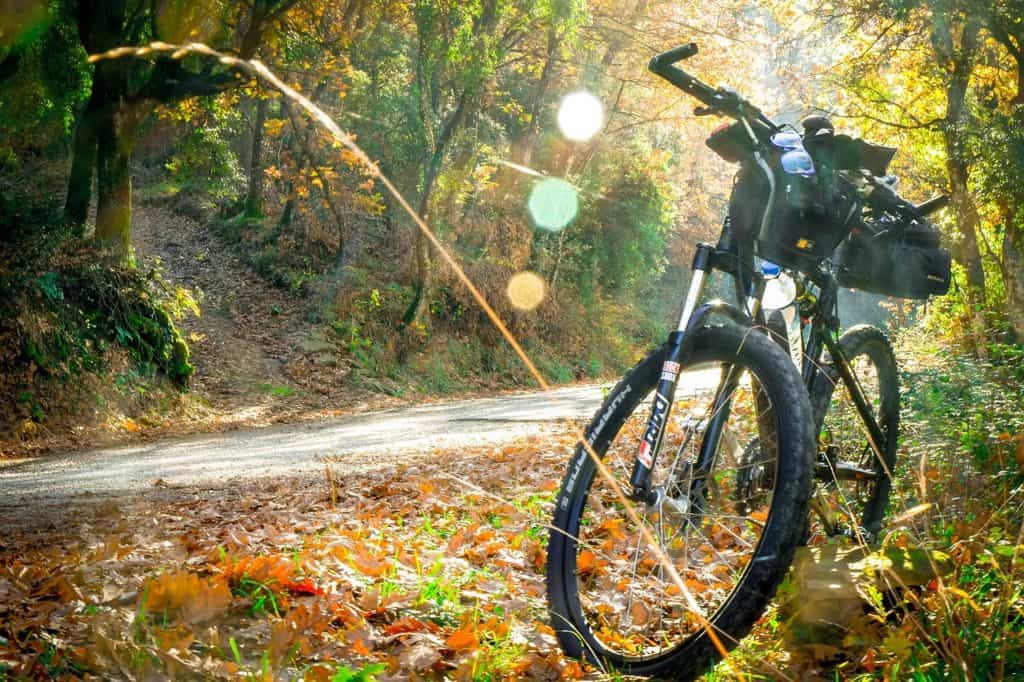 The tires on a mountain bike should reflect the terrain you’ll be riding on. If you’re commuting to work and will spend the majority of your ride on dirt trails than you’ll want to look at tires with larger knobs on them.

The tread is made to dig into the dirt and give you greater traction while riding on rough terrain. These tires would also be great if you’ll be riding in winter conditions (snow, slush, rain, etc.).

But if you’re going to be primarily riding the mountain bike in an urban setting on paved streets than you’ll want to put slick tires on the bike.

Knobby tires will get worn out very quickly on pavement, and slicks will slightly increase your speed due to less rolling resistance.

How will mountain bike tires compare to those on a road bike?

The biggest advantage of mountain bike tires compared to narrower road bike tires is that they can handle potholes, bumps, and debris better.

The wide tires can roll over smaller obstacles with more ease. If you hit a pothole unexpectedly with a road bike there’s an increased chance of crashing compared to unexpectedly hitting a pothole with wide mountain bike tires. These wider tires offer a more comfortable ride.

One of the disadvantages of mountain bike tires (even slicks) is that they add weight to your bike and the compound they’re made of increases the rolling resistance. In other words, if you want to go as fast as you can on a lighter road bike you’ll need to pedal harder.

Depending on the length of your commute this could mean riding only for a few more minutes.

The geometry of a mountain bike allows the rider to take an upright position. This is more comfortable compared to a road bike which forces the rider to lean forward.

The upright position also makes it way easier to look over shoulder to look for traffic or another cyclist. It gives you as a rider the ability to see more of your surroundings while also increasing your visibility to others. If you’re hoping for comfort than a mountain bike is for you.

The trade off is that the upright position makes the cyclist less aerodynamic.

A road cyclist leaned forward has less wind resistance and drag allowing the rider to cut through wind. The upright position on a mountain bike will create more drag, and you’ll be slower unless you pedal with more force.

The Suspension on Mountain Bikes

Full Suspension – Full suspension on a mountain bike is nice under rough terrain, because it will absorb most of the shock.

Hardcore mountain bikers choose these bikes for technical trails, because they can handle anything the mountain throws at them. The suspension will absorb any of the jarring and bumping from the trail.

While this is great for technical, rough terrain it’s not as useful for most bike commuters.

Secondly, you cannot fit mudguards, a rack and even panniers on a bike with rear suspension. As a bike commuter you’ll be forced to carry a backpack if you want to carry anything.

Overall, my opinion is that full suspension on a mountain bike isn’t necessary unless 95% of your commute is downhill through the mountains.

Also it should be noted that climbing hills with full suspension is a nightmare. If you can’t lock the full suspension during hill climbs than you’ll be wasting a ton of energy as your bike bobs up and down.

Want to ride off the curb or ride on a bumpy route? The hard tail can take the edge off the bumpiness, and keep your body from getting jarred.

Compared to a Bike with No Suspension – Suspension on a bicycle adds weight. Weight is going to slow you down. You’ll need to decide if you want the added weight for the ability to roll over rocks, curbs, and bumps with ease.

Again you’re sacrificing speed and efficiency with a mountain bike, but you’re gaining a durable and incredibly functional commuter bike.

Mountain bikes are made to take a beating and go on the road less traveled. I’ve seen mountain bikes ridden not only on mountain trails, but down flights of stairs, over patches of sand, and even over roads with the poorest of conditions.

In addition, most mountain bikes can carry a lot of stuff. Most of them can be rigged with front or rear racks, panniers, and outfitted to carry groceries, work supplies, and anything else you want to haul.

Gearing is different for every bicycle, but generally mountain bikes have lower gearing. If your bike commute has lots of hill than you’ll be thankful for the low gears, because it will make it much easier climbing.

Other Questions to Help You Decide

The nice thing is you won’t need to spend a dime. The best bike to start commuting with is the bicycle you already own. Give it a shot, and if you get hooked on commuting you can always buy a different type of bike later.

How far is your commute? I wrote an article on “How far is too far to bike to work?” that may be beneficial in your decision. You should determine how much time you have to commute.

If you’re planning to ride a mountain bike 12 miles on paved road than you’re looking at a 50 to 60 minute commute depending on your fitness level. Do you have that much time to spend on a bike? If not, it may be wise to choose a road bike to be able to ride faster and get to work in less time.

What’s a good mountain bike to buy? There’s a variety of mountain bikes on the market that range from $300 to $6,000+ dollars.

If you’re looking for a brand new bike than I would recommend checking out your local bike shop to see what they offer. The local bike shop can also make sure that you get a bike that fits you. New bikes are wonderful, but if you’d prefer to spend less than look into getting a used bike from Craigslist or other similar buying/selling platforms.

If you’re looking for an entry level mountain bike to buy online than you can check out Diamondback Bicycle’s Hook. It’s a good beginner mountain bike that will handle the trails, but could also be used as a commuter. You can see it on Amazon here.

Is it OK to ride a mountain bike on the road? Yes, but if you’re going to be riding primarily on the road you should invest in slick tires. Regular studded mountain bike tires will wear out quickly on tarmac and paved roads.