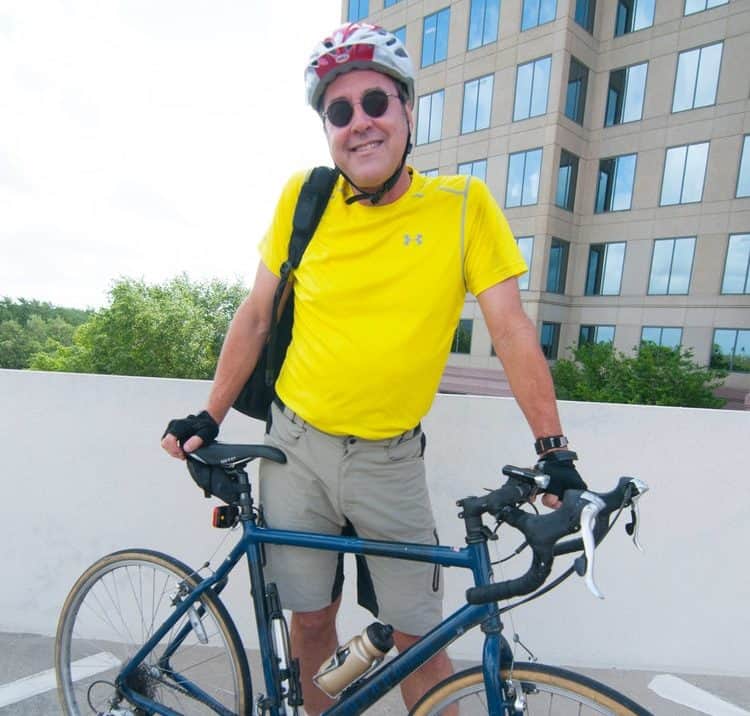 This is Robert from Orlando, Florida. Statistically Orlando is one of the worst cities for pedestrian and cyclist safety. The combination of tourists, elderly drivers, and a dense population are all factors. While some may hear this and refuse to bike commute, Robert has decided to go all in. He’s hooked and knows that it benefits not only him, but also his state.

If you’re from Florida, perhaps its time to give bike commuting a try! You’ll take one more car off the road, get to enjoy the Florida sunshine, and help our planet. Enjoy this regular bike commuter highlight of Robert.

Commute Distance: Each way: on Westwind the Cannondale T-700 – 8 miles. On Manfred the Brompton (with bus and train laziness) – 1.5 miles

What got you started? Honestly? A quarter-century ago, seeing our two long-distance cycling commuters saunter into the office like fighter pilots with their helmets and gear – it really caught my attention. The breezy fun of it all, with rain and cars and flashing speed – I was hooked.

Any stories from your commute? Over twenty years commuting in this burg? A bicycle head-on crash into a Mormon missionary. And when I hit a fresh pothole and broke the entire left handlebar off (and ate a great deal of dirt). And the Indian mom who wouldn’t let me ride home in a thunderstorm, stomping a sandaled foot and threatening me with an ear-pinch if I didn’t accept her ride. And with the Brommie, just doing the fold-show on the train platform, making lots of friends and being called “The bicycle guy”.

What is one thing you wish you knew before starting to bike commute? Why did I wait so long? Now I’m evangelical about it. There is a corporate poster of me with the bike on our floor and now two people on my team (and two other people on this floor) ride bikes in. We joke that our office looks like a Dutch train station.

What Kind of Bike & Where did You Get it? The Cannondale T-700 I bought from Orange Cycle, a perfect all-around ride. I’ve had it for something like sixteen years. The Brompton I got from Ace Metric Cycles – who’d have thought that there was a Brompton dealer three blocks from my house? There is also a Trek tandem in our garage for riding Critical Mass with the wife.

What factors went into deciding to ride a Brompton? I’d been riding the Cannondale for many long years and, with the development of a new rail transport system (Sunrail) and supporting Lynx bus routes, I only had to solve the 1.5 miles to the station. The Brompton was the perfect solution, permitting fold-n-carry flexibility. The irony is that as soon as I started bromming in, a coworker wanted to start road bike commuting with me. So now I have to split rides between the two. Torn between two lovers…

What challenges are there to bike commuting in Florida? Well, no sabretooth tigers, thankfully. Otherwise, we have a sprawling city with a lagging bike infrastructure. Add to this the 4pm afternoon thunderstorms in the summer, blistering temperatures, prevailing headwinds, airborne (and lung-inhaling) bugs around our numerous lakes, and an openly hostile motorist community and, hey, it makes for a crazy-exciting place to ride.

What gear do you routinely carry for your commute? When running the road bike, I’ll backpack in a change of clothing and my writing laptop, along with breakfast and lunch. I’m fortunate my corporation has a small shower room for our use. The Brommie I ride with street clothing, with the computer and meals jammed into the forward bag.

Anything else you’d like to share about bike commuting? In the city hamstrung by road construction and lodged with cars, it baffles me why more people don’t ride. With benefits towards the environment and health, it seems a no-helmeter. Even the community benefits – waving to other cyclists and stopping for freshly-squeezed orange juice from a kid’s stand, it just adds so much to my life. Cars don’t.

Manfred the Brompton at the Train Station 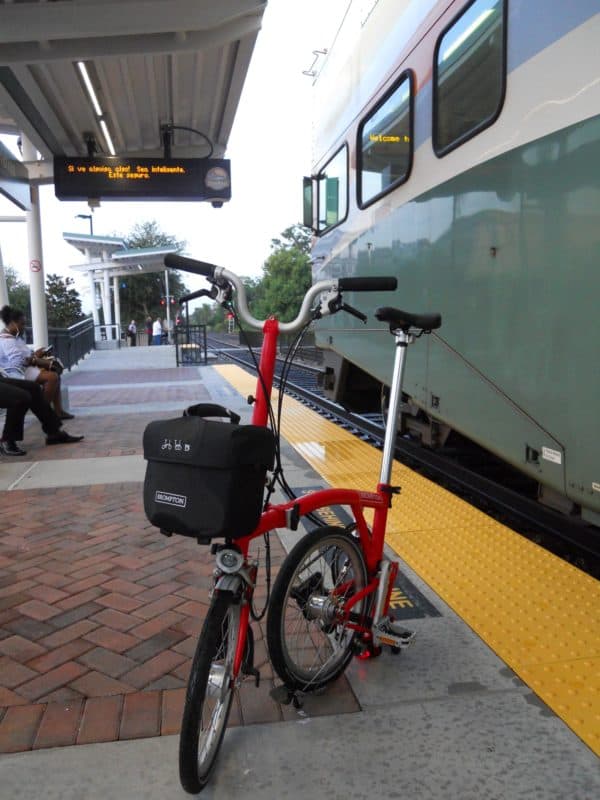