This is Elizabeth from Brooklyn, NY. She loves to ride bikes. It doesn’t matter if its commuting around Brooklyn or riding her road bike across Iowa (which she’s done twice!). It is a passion of hers, and she wants others to be able to experience the joy of cycling too. You’re going to love reading about her experience bike commuting. In particular, her take on interacting with angry motorists is admirable. The world is full of angry people who like to yell at bicyclists. Unfortunately, sometimes we can shoot words back which only adds fuel to the fire. Hopefully we all can take notes from Elizabeth and return anger with a kind word. Enjoy this regular bike commuter highlight! 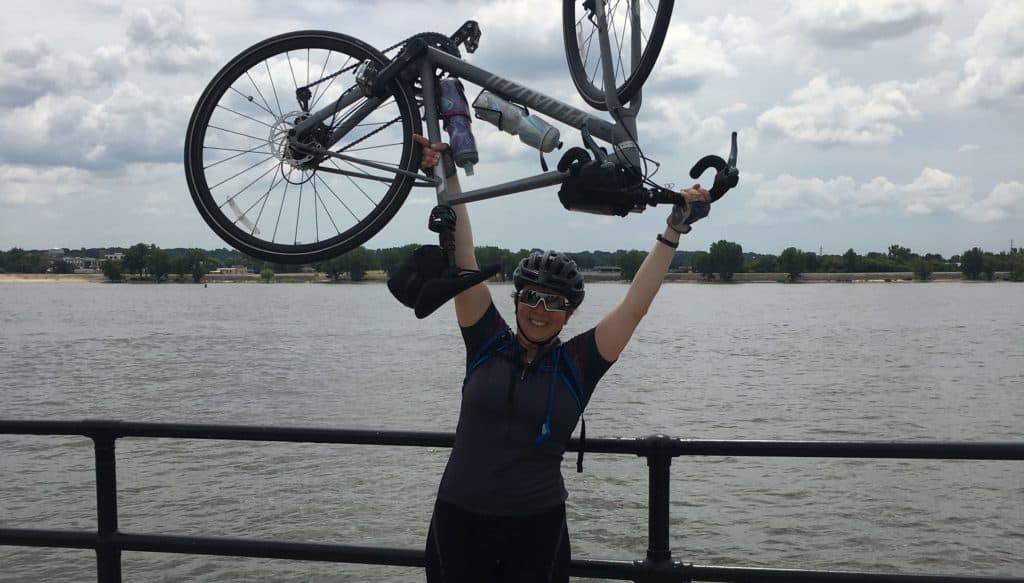 Occupation: Director of Production and Operations for St. Ann’s Warehouse, a theater in Brooklyn NY.

Commute Distance: Currently 4 miles each way (which in NYC traffic takes about a half hour.) plus errands or extracurricular activities. I’ll often put 15 miles in just getting places I need to be during my day.

What got you started? About 6 years ago, I took a job that was easier and cheaper to get to by bike. I’d briefly experienced bike commuting during a transit strike about a decade earlier, but at the time I was working in midtown, and it seemed to snow most of the strike, so I didn’t stick with the bike (though I used it in my neighborhood to go to the farmers market.)

I didn’t learn how to ride a bike until I was 25, and I only learned then as a means of getting places. I was at a theater workshop retreat that was on a wildlife preserve, and two miles down the road there were horses we could ride, and two miles down another road there were kayaks we could take out through these rice fields. I didn’t know how to ride a horse or how to kayak, so in order to learn those things, I learned to ride a bike. I joke that I’m a teenager in bike years.

What advice would you give to someone who is thinking about bike commuting in Brooklyn? Biking is the fastest way to get around Brooklyn, and a great way to get to know how all the neighborhoods connect. Now if I’m in a car and there’s a traffic jam, I know at least three alternate routes home from anywhere! There are some really beautiful routes here too, along the waterfront, down through Ditmas Park with all the Victorian homes, etc..

Biking in traffic feels better the more you do it. You have the right to take the full lane if conditions prohibit you from riding in a bike lane or in a parking lane. (If you ride in the parking lane, which I do for a lot of my commute, make sure you stay 3’ from the vehicles that are parked so you don’t get doored.)

Practice using hand signals; it’ll improve your riding skills, and impress the drivers who could use a reminder to use their signals.

There are a lot of forums online where people ask for advice, and there are no silly questions. I was delighted to learn recently that loads of us wear through our jeans in exactly the same spot.

You can ride in most weather. “There’s no bad weather, only bad clothing choices” is true. But also you don’t need the best $$$$ whatever jacket to stay warm. In the winter, I tend to bike in my calf-length parka, which keeps me nice and warm. It’s not bike-specific, it’s just what I would wear off a bike. And I love these fleece-lined wool mittens someone gave me. (That said, I rarely ride in snow or rain because I just don’t enjoy it. And the whole point of bike commuting is that I love it. Well that, plus easy exercise, faster commutes, and some fresh air.) I have a hat and an ear cover headband thingy and a balaclava for the really cold days. Chemical toe warmers – some days there is literally no other way to keep the feet warm.

Don’t leave anything on your bike that someone could tinker with and walk off with in a matter of a few minutes. Lock anything down if you’re going to leave your bike outside. (But that said, don’t be afraid to leave your bike outside, if the loose bits are secured and you have a good lock. The $120 kryptonite NYC lock is the best $120 I’ve ever spent. Yes, it’s silly to spend 1/3 of the price of your bike on a lock, but the dang thing works.) Someone will try to steal your bike. The harder you make it for them, the more likely it is they’ll find an easier target.

I try to structure my commute to have a downhill just before I get to work. It’s great on hot days to cool off before you walk into the office.

Any stories from your commute? One time I was riding home down a narrow street. This car came up behind me, clearly irritated. When we got to the light (where there was space to wait side by side) he rolled down his window and yelled some expletive-filled version of “Share the road!!” After that, I decided that rather than meet angry drivers with more anger, I’d start saying things like “Have a great day!” or “I hope things get better for you today!” I can’t always remember to be nice, and I definitely am guilty of yelling some “thoughts” at some unobservant drivers, but I try to break the negativity cycle, otherwise it just keeps escalating.

Recently, I had a bout of pneumonia, and I kept being really short tempered with people. Once I was able to get back on the bike to commute, I realized that a combination of physically moving, along with being able to practice being angry and letting it go, are super valuable for my mental health.

I’ve got a couple accident stories that I’ll spare you, but the thing that I remember about them most are the people who came to my rescue. I’m sending giant thank yous into the universe to the bike delivery guy who waited for me to call and get into an Uber. Another thank you to the couple who found me after my worst accident (a trip over the handlebars down a hill!) and brought me an ice pack and baby wipes, put my bike in their SUV, and then DROVE ME HOME. I mean…. New Yorkers can be the best sometimes.

My favorite commutes are the ones where I figure out a puzzle I’ve been working on… something about biking frees my brain up to think about things in a different way, and I love it when I get to work with a new idea of how to solve something.

What is one thing you wish you knew before starting to bike commute? It’s really easy to get a “snake bite” puncture in your tube if you don’t keep your tires filled. This happens when you hit a pot hole, and the pressure of the tire slamming down actually makes two small holes on the bottom of the tube like a snake bite. I got a lot of flats when I started riding. I haven’t had a flat on my commuter bike in 2 years. Watch me get one tomorrow…

What Kind of Bike & Where did You Get it? My commuter bike is a Trek 7.1 that I purchased at Bicycle Habitat in the old Soho store. It’s reaching the end of its useful life and is due for a replacement when I have some extra funds. I have every part on it glued or locked down: pinwheel locks on the wheels, seat lock made by the folx at BH out of old bike chain and tube, even the rack is epoxy-ed into the bolts. I leave the bike outside all the time (part of why it’s dying, don’t look too closely at that rusty chain) but I don’t have space for it indoors.

My road bike is a Specialized Diverge, also from BH (the Park Slope shop.) I purposely don’t have a lock for it so I won’t leave it outside.

What gear do you routinely carry for your commute? I have a bell, front and rear lights, and my gigantic lock. The lock practically weighs as much as the bike itself.  I try to always have a bungee net with me in case I pick something up on the way home and want to put it on my rack. I also always have a scarf in case it gets cold.

I usually carry a Timbuk2 bag that has Velcro straps on the bottom so I can strap it to the rack if I want, if it’s hot out or the bag is heavy (or if, like tonight, it suddenly started raining and I wanted to use it as a makeshift fender.) Usually I just carry it on my person.

Anything else you’d like to share about bike commuting? Bike commuting has lead me on some great adventures. I’ve ridden across Iowa twice (the first time on my hybrid!), I’ve joined a bike club in NYC and completed one of their progressive training programs, and I’ve done countless solo rides out to the Rockaways for tacos or a quick swim or just to hang by the ocean for a bit.

I love the brain space that commuting by bike gives me. I can’t be on my phone, but I can work out a puzzle I’ve been struggling with at work. It gives me some distance and associative thinking time, so when I get to work I’m ready to start in on a project.

Instead of riding RAGBRAI (the (Des Moines) Register Annual Great Bike Ride Across Iowa), Elizabeth is participating in the Climate Ride through Glacier National Park into Waterton, Alberta. (Crossing an international border by bike for the first time!) The ride raises money for Glacier National Park to foster clean energy and conservation efforts. If you would like to help Elizabeth reach her fundraising goal and help save the planet, you can participate here! (The Climate Ride is a 501(c)3 and donations are tax-deductable.) Thank you!

Elizabeth’s Commuter Hybrid in all its Aging Glory 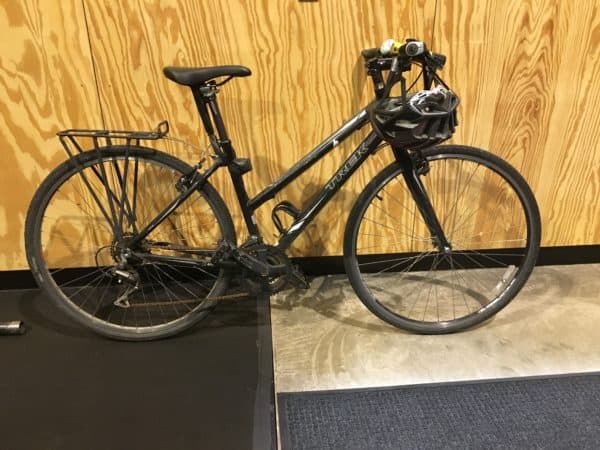 Elizabeth with the hybrid on her first trip across Iowa. On the last day of the ride, a priest came out of this church carrying a cardboard cut-out of the pope. Another woman and her pulled over to take photos. As they were leaving, the priest was coming out with another cardboard cut-out, this time of Luke Skywalker. 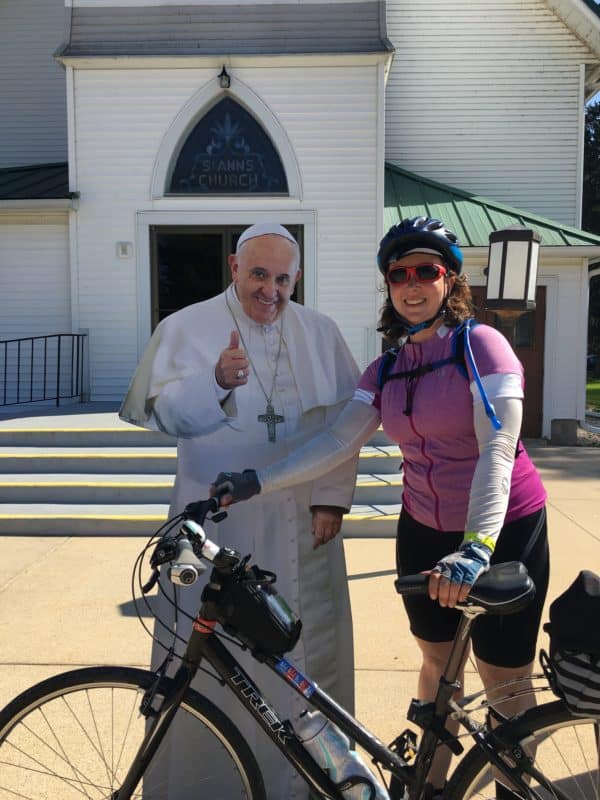