When you’re in the market for a new bike, one of the factors you should consider is a bicycle’s weight.

A lighter bicycle will be more efficient, faster, and accelerate quicker than a heavier bike. If you’re riding bikes as a hobby this might not mean much, but it definitely can make a difference in a race.

In addition, lighter bikes are easier to store, transport, and carry for commuters. If you’re bike commuting you don’t want to have to lift a 40 lb. bike up a flight of stairs to the office.

So how much does a bike weigh? A bicycle can weigh 17 lbs to 80 lbs depending on the type. Road bikes are the lightest weighing an average around 17 lbs. Mountain bikes are heavier with an average of 25 lbs. Hybrids and beach cruisers weigh around 25 lbs. Lastly, e-bikes are the heaviest weighing up to 80 lbs. 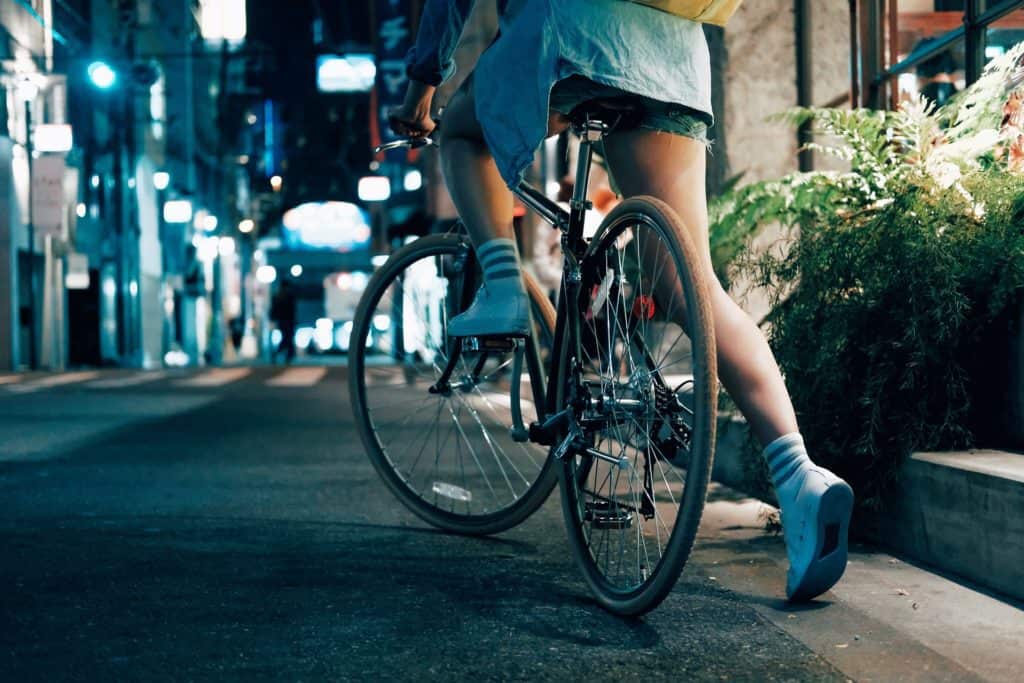 Why is a bike’s weight important?

A bike’s weight influences how quickly you can accelerate on a bike and how fast you go.

In professional bike racing even sheer seconds can make a difference between first and second place, and bike weight is of the utmost importance.

For the cycling hobbyist, a bike that weighs only a few pounds more than another won’t make much of a difference. It would be more beneficial and cost effective for the rider to lose weight rather than spend money on purchasing a lighter bicycle.

As I said in the introduction, a bike’s weight is also important as a bike commuter. If during your commute to work you need to lift your bike you’ll want a bicycle that is lightweight and not too heavy.

If you are a fan of numbers and science than you should definitely check out the book FASTER at Amazon. It’s a scientific look at what truly makes a triathlete go fast. The author Jim Gourley digs into the nitty-gritty details while answering the question, “Should I buy a lighter bike?”

In the remaining part of this article I will explain in more detail why various bikes weigh as much as they do. In addition to the traditional bikes, I will talk about the weight of single speeds, recumbent, BMX, folding bikes, and more!

The average weight of a road bike is 17 to 18 pounds. Road bikes will vary in weight depending on frame size, the frame material, and the components. Road bikes can be as heavy as 25 to 27 lbs.

Road bikes are built primarily to be used on paved roads. When you think of a “racing bike” you’re likely picturing a road bike. Road bikes are generally the lightest of all the bikes, because they’re made to go fast. In addition, they have smaller tires which reduce the weight

They have a rule that the minimum bike weight in their races is 6.8 kg or 14.99 pounds.

You won’t see a professional in the Tour de France riding anything lighter. Their reasoning for this is to keep cyclists in professional races from going TOO fast. They consider this a safety issue, but this could change in the future.

Mountain bikes are heavier than road bikes for a number of reasons. A mountain bike often has extra gears to help the rider pedal up steep dirt trails. They also come equipped with large tires, and occasionally suspension to make for a smooth ride.

With the suspension, larger tires, and extra gears most mountain bikes weigh an average of 21 to 29 pounds.

Mountain bikes are designed to handle rugged roads and rough terrain, and so they’re usually heavier compared to other bike types. The variance in weight between mountain bikes will depend on whether the bike is a hardtail (suspension only in front) or full suspension.

E-bikes are heavy! Not only are they the size of a regular bike, but they also have a battery strapped to them.

Depending on the type of e-bike you are looking at, an e-bike weighs as low as 40 lbs. and as much as 80 lbs.!

The difference in weight will depend on what type of e-bike you purchase. There are foldable e-bikes that are made to be lighter and easy to transport. These folding e-bikes are closer to the 40 lb. mark.

If you’re looking for a heavy duty mountain bike that can survive the apocalypse, climb any mountain, and have long-lasting battery life than it will weigh closer to 80 lbs.

The nice thing about e-bikes is that while the battery does weigh more, it will assist you in pedaling. Riding an 80 lb. e-bike? Make sure to use that battery juice and you’ll feel like you’re riding a feather.

BMX bikes weigh 25 to 28 pounds. BMX bikes are designed for racing and doing tricks. Every BMX rider has a preference for how much his bike weighs, but generally speaking lighter BMX bikes are better.

A lighter BMX bike will not only allow you to jump higher, but also spin the bike faster. The lightest BMX bikes are made of titanium, but are more costly too.

One feature that is primarily only found on BMX bikes is grinding pegs. These pegs are installed on the tires to allow the rider to grind on rails and curbs. Depending on how many pegs you have on your bike (up to 4) will increase the weight of your bike.

With the rise in popularity of fat bikes many people are asking, “How much does a fat bike weigh?” A fat bike can weigh anywhere between 25 to 45 lbs.

These off-road bikes are equipped with large, fat tires so that the rider can pedal over rough or unstable terrain. Fat bikes are perfect for riding on the sand, snow, and mud. Some riders enjoy the aesthetic of the fat bike and use them like a mountain bike or even as a commuter.

What defines a fat bike is its large tires. To accommodate these large tires, the bike frame must be large and incredibly sturdy for the tires and the extra weight in rim size too. This causes the bike to be heavier.

Beach cruiser are the perfect bike for….cruising. Make sure you are rigged with something to hold your drink and take a leisurely ride. Because they’re built for comfort over speed they can be relatively heavy. Typically with this kind of bike the less money you pay the heavier its going to be be.

A typical beach cruiser weighs between 35 to 40 pounds, but as I said there will be some that exceed that weight.

Beach cruisers are designed with large handlebars so that the rider won’t need to stoop. They typically have wider tires to give a smoother ride. Many beach cruisers have extra large seats to provide extra cushion for the rider’s bottom.

In addition, they are sturdy bikes that can withstand a small crash.

Folding bikes have become all the rage these days, and they live up to the hype. You can read my take on why I believe folding bikes are worth every penny for many bike commuters.

These types of bikes are designed to fold into a smaller, more manageable shape that can be carried. Part of their innate purpose is to be lightweight so that you won’t need to be the hulk to carry them onto the metro or up a flight stairs.

Folding bikes weigh 20 lbs to 25 lbs depending on the brand and model.

There are some high-end carbon fiber folding bikes that weigh less than 20 lbs, but they do come at a cost. If you’re in the market for a folding bike you’ll want to check the exact weight knowing that’s what you will need to carry when it is all folded up.

Your basic single speed bike will weigh about 20 pounds.

Single speeds have less components than other bikes and so they’re lighter. The simplicity of a single speed bike makes these bikes easier to maintain too. Depending on the size of the frame and the material its made of you could even find single speed bikes that weigh closer to 14 pounds.

It’s surprising that a bike made for a 60 lb. kid can weigh half his/her weight! The reason that kid’s bikes weigh as much as adult bikes is two-fold.

The first reason is that the weight helps keep the bike stable. As kids are learning to ride a bike they want the weight of the bike to help keep the child grounded. A lighter bike will be flimsier and less stable.

Secondly, kids bikes are heavy because they’re going to be abused. Hopefully not often, but kids are more prone to crash bikes or toss them around. Kid’s bike manufacturers design kid’s bikes to take a beating.

With this said, there are bike manufacturers who do sell lighter kid’s bikes. Unless your child is a bike racer than weight shouldn’t make any difference for a kid who just wants to ride his bike around the neighborhood.

Recumbent bikes allow the rider to pedal from a reclined laid back position.

The rider’s own weight will be distributed over a larger area, because they will be supported by their back and bottom. On a regular bicycle, the rider’s weight will sit primarily on their butt and feet.

The first is that they are much more comfortable, because of the rider’s position.

Secondly, they have less wind drag than riding an upright bike. The fact that the rider and bicycle are closer to the ground allows them to reduce the wind drag by 30% while riding on a flat surface.

Other Factors that Influence Bike Weight

There are multiple factors that will affect the weight of a bike. The following is a list of these weight factors..

For most of us a bike’s weight isn’t going to make a lot of difference. It can be fun to talk about how lightweight your bicycle is, but the difference between a few pounds isn’t going to radically increase your speed.

For many of us, a higher level of fitness or shedding a few pounds would increase our speed more than anything else.

If you’re a bike commuter you may want to think about the weight of your bike if you’re going to be lifting it up a flight of stairs or onto a bus rack. It can be cumbersome lifting a 45 pound bike onto a car’s bike rack.

No one looks forward to lifting even a 35 lb. bicycle up stairs to their cubicle. Keep a bike’s weight in mind if you plan on having to lift it a lot.

I hope this article was helpful to you! Happy bike commuting!