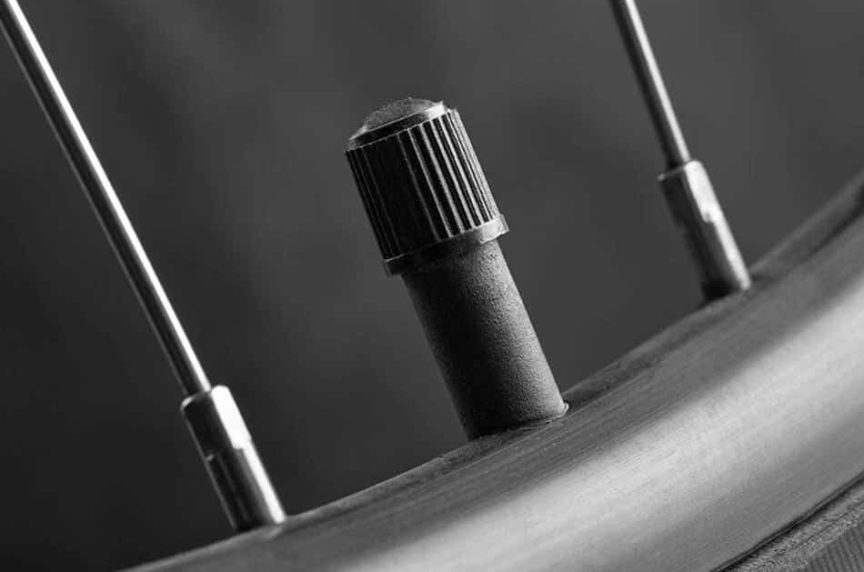 If you’ve been riding bicycles for a while you’ve probably had this happen to you. You go to pump up your bike tires with air, and notice that the cap isn’t there. It’s missing! Perhaps it wasn’t screwed on tight enough or maybe you forgot to put it on last time you aired up the tires. Regardless, the valve cap is gone and you begin to wonder…

Will my bike tire deflate without the cap? No, bicycle tires will not lose air or deflate if the caps are missing. While they are important their primary function is to keep the valve dirt free, and not to hold in air.

Mountain bikes, hybrids, cruisers, and a few other bikes usually have tubes with a Schrader valve. It’s basically a tube with a flap that holds against air pressure. The valve caps job is to keep grime and dirt out of the flap. If dirt finds its way in, the valve won’t do its job and you will likely need to replace the entire bike tube.

Road bikes and some hybrids use tubes with a Presta valve. This is a thin, narrow tube that has a metal screw feature that seals the valve shut. Keeping the screw shut is the most important thing, and the plastic caps on top does two functions. First, it keeps the stem protected from dirt, grime, and oxidization which is important. If the stem oxidizes it can seize up the stem. The cap also prevents the fragile stem from getting bent out of shape.

For more information on the difference between Presta and Schrader valves – Click Here to Read More!

No, but they will give more life to your tubes. Some people intentionally take them off, but this opens their tire valves to corrosion. The caps don’t take that long to take on and off. I wouldn’t intentionally remove the caps.

You can still ride your bicycle even if it doesn’t have a cap on the tire stem. It won’t affect your riding or the air pressure in your bike tire. There are plenty of cyclist who have ridden hundreds of miles without their valve stem caps on. Some of them knew that the cap was missing and continued pedaling. Others didn’t notice and pedaled in ignorance. The outcome was the same. Even without the tire cap they were able to ride their bike safely and with tires filled with air.

Where can I buy a valve stem cap?

The easiest place would be your local bike shop. Guaranteed they have them for sale, and they won’t cost much. You could also buy basic bike valve stem caps here on Amazon.

Your basic valve stem cap is made of plastic, but if you want to bling your bicycle out – you can purchase caps made out of metal. There’s no added benefit other than they are more decorative. You can see metal stem caps on Amazon here.

But why is my tire leaking?

It’s an old cyclist legend that the tire caps lock the air into the tubes. It’s just not true. Bike tires have a natural deflation depending on their age and use. This could be the reason for your leaky tube. It could also be, because your tire valve did, in fact, get dirt in it without the cap to protect it. Or you may have a hole in your bike tube.

Give Your Bicycle Style with these Decorative Tire Caps

Bored of the basic black tire stem caps? Do they plastic crack and break? Look no further! Check out our article 13 Cool Bike Tire Valve Caps You Didn’t Know You Needed. It’s got a variety of aluminum valve caps that are durable, and will bling out your bike.

The same place as that missing sock that never made it back to the sock drawer from the dryer. Missing stem caps gather together on a magical island with other lost and forgotten household objects. Never worry! They’re having a great time on the island.