Have you ever went to the local bicycle shop to get new tubes and been stumped when asked, “What kind of tubes do you need? Presta or Schrader?”

I have been there too!

Unsure of which valve is which, I mumble what kind of bicycle I ride and that I need the tube with the skinny valve. I didn’t know which valve was which or what the difference was between the two.

That is until I finally sat down to research the valves to better understand what valves I needed for my bike. This article is a summary of what I discovered on Presta and Schrader valves. 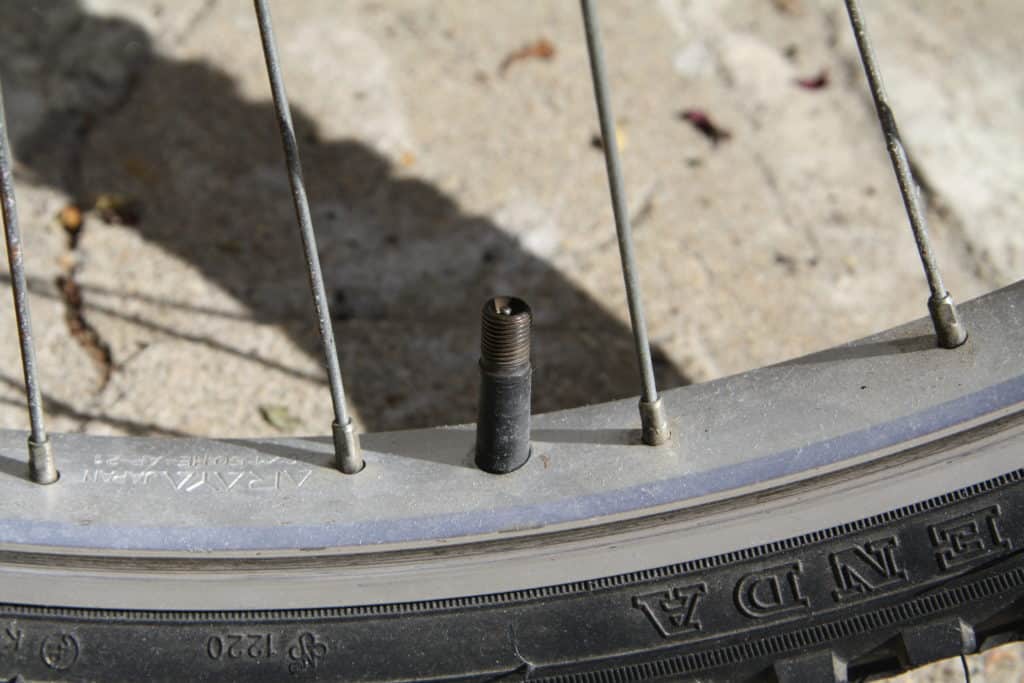 The design for the Schrader valve was invented in 1891 by August Schrader. You’ll find this valve on most motorcycle and automobile tires. It’s commonly used on automobiles, because of its durability.

It’s wider than a Presta valve with a threaded top for a cap to be screwed on. In the center of the valve is a spring loaded check valve.

This spring inside the valve is what closes the opening preventing air from releasing. When using an air pump the pressure forces the spring to push back, opening the valve to allow air to go in and out.

If you’ve ever pressed down the pin of a Schrader valve you know that it opens the valve releasing the air out of the tube and making the classic “psssstt” noise.

Schrader valves are common on hybrid bikes, some mountain bikes, and cheaper bikes. You won’t find a Schrader valve being used on a road bike, because it is too wide. The dimensions of Schrader valve’s are generally always the same – 8mm wide and 32mm long.

The two advantages of Schrader valves are their ease of use and durability. Because automobile tires use Schrader valves you can refill tubes with this valve at nearly any gas station with an air pump.

While I personally have never had issues with a Presta valve breaking, some cyclists hold to the idea that the wider Schrader valves are more durable and resistant to damage.

If you look at the photo below of a Presta valve you can see that the top is slightly bent, and so you can imagine that it’s not too hard to break one. Again – I’ve never had an issue with one breaking, but it can happen.

One of the issues with Schrader valves is that if the pressure is low they be pushed into the rim when you’re trying to pump it with air.

Unlike Presta valves the whole body isn’t threaded so that you can place a nut at the bottom from preventing them from retreating into the rim. Their valves can also wear out and begin to leak air.

The last disadvantage is that they require more force while pumping compared to filling a Presta valve tube. 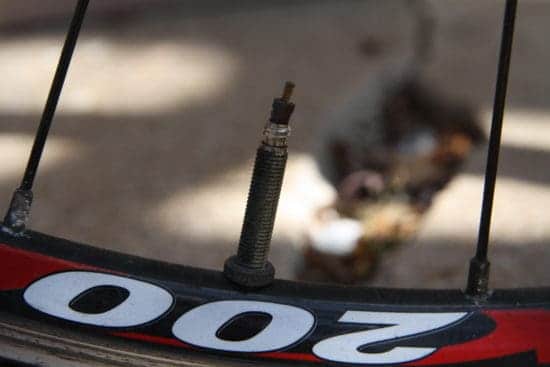 Presta valves are significantly thinner than Schrader coming in at a 6mm diameter. Unlike Schrader valves there are a variety of lengths with the most common being 32mm, 42mm, 60mm, and 80mm.

They have multiple lengths, because some cyclists use deep rim wheels and there must be enough valve sticking out to inflate the tube.

One of the benefits of Presta valves is that they only require a smaller hole in the rim. Bicycle rims are designed to be strong and have structural integrity.

The weakest point of every bicycle rim is usually the hole needed for the valve stem. The smaller the hole the stronger the rim can be.

On the top of a Presta valve is a nut that must be unscrewed to allow air in and out. Presta valves are designed without a check valve and are sealed from the pressure within the tube.

The design of a Presta makes it easier to pump with air, because it has no spring like Schrader valves. In addition, it’s super easy to let air out quickly because you just need to unscrew the nut at the top and lightly press down.

The benefits of a Presta valve include its narrow size and the ability to hold higher pressures. It requires less force making it easier to pump, and has no issue with leaking air.

Another benefit of Presta valves is that they are threaded through the entire body allowing a nut to be used to hold the valve. You’ll never need to worry about pushing the valve into the rim while pumping it with air.

What pump should I use for my Presta or Schrader valve?

The pumps for the two are different, and you’ll want to make sure you buy a pump that fits your valve. Because Schrader valves have a pin that must be depressed to allow air inside the tube you’ll need a pump that does this.

Many bike pumps have come with two heads or adapters to allow them to be used with either valve. This is the same for if you’re using CO2 cartridges to fill your tubes.

You’ll want to make sure the CO2 adapter fits your type of valve. Presta works much better with hand pumps, because there’s no spring giving extra resistance.

If you’re looking for a solid bike pump that can handle both Presta or Schrader valves than I would recommend the Vibrelli bike pump on Amazon.

It’s a great price, gets the job done, and can easily switch between the two valves. As a bonus it comes with a 5 year warranty, because the company knows that it has a solid product that will last.

Are Presta valves better than Schrader?

I hope by this time you understand the reasons that Presta valves on bicycles are superior to Schrader. Presta valves allow higher pressure, won’t slip into the rim, take less rim space, and won’t leak.

With this said, most of time you won’t have a choice in which valve you use as the rims of your bicycle will be made for one or the other.

Are Presta and Schrader valves interchangeable? Schrader valves typically won’t work on rims that are made for Presta valves, because they’re too wide. You can use a Presta valve on rim that’s made for a Schrader valve, but it’s not advisable. It will work in a pinch, but not good for an extended ride. This is because it won’t be a tight fit and the Presta valve will move around. In fact the movement can cause the rim to cut the tube at the base of the valve.

You should avoid drilling a wider hole in rims made for Presta to fit a Schrader. The rims are made to specific dimensions and tested to make sure they won’t bend or break. Drilling a hole into a rim can drastically reduce the structural integrity of the rim.

Can I replace a Presta or Scrader valve? Most tubes have valves that are attached and unable to be replaced. If your valve is broken, leaking or otherwise not working than you should replace the entire tube. The one exception to this are tubeless tires which allow for the Presta valves to be replaced. If your tubeless tire is leaking air make sure to purchase the correct valve for your specific rim and wheel model.

How can I inflate my Presta valve without an adapter? Believe it or not, there’s a hack to be able to quickly make an adapter so that you can get your Presta valve filled without an adapter. All you’ll need are scissors and the plastic cap on your valve. Basically you’ll cut the very top of the cap off, flip it upside down, and place it on the valve. All you need to do now is pump it with air! You can watch the video below if you need more clarity.