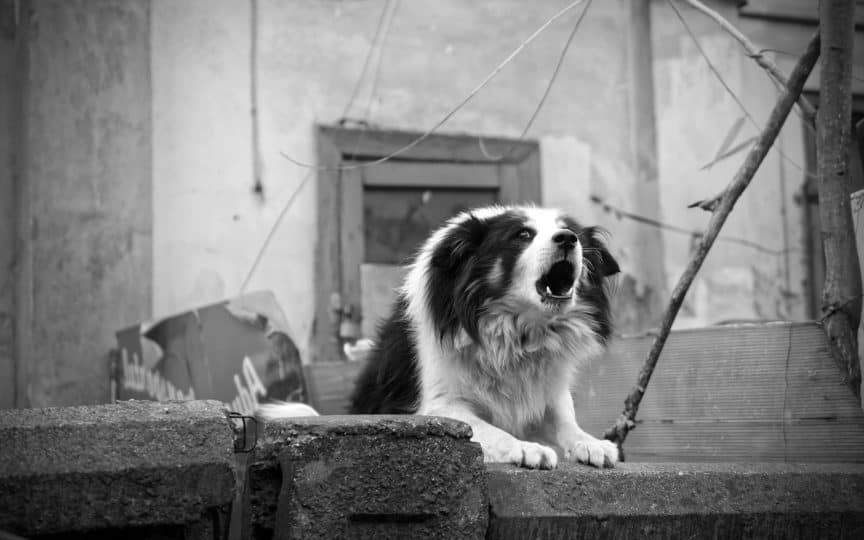 You’re on a leisurely bike ride through the neighborhood, and BARK! BARK! BARK! A dog behind a fence is berserk yelping and barking with everything it can muster. Not willing to find out if the dog can get through the fence you pedal fast away. The experience has you wondering though…

Can you outrun a dog on a bike? Yes, you can pedal fast enough on a bike to get away from an attacking dog. But will you in the moment? It depends on a few factors. Your physical strength, what type of dog it is, the terrain, and when you notice it coming.

The average dog can sprint around 19 miles per hour. There are faster dogs such as the Greyhound (45 mph), German Shepherd (30 mph), or Husky (28 mph). Dogs are descendants of predators that survived by chasing down prey. Their instinct is to chase down fast moving objects such as deer, squirrels, and even a cyclist.

How fast can a cyclist sprint for a short distance? Obviously, it depends on your fitness levels, but it can range from 20 mph to 40 mph. The top sprinters in the world can top off at 45 mph in a sprint. So what about you? If you’ve got a stat tracking program (such as Strava) you can test out exactly how fast you’re going in a sprint.

Knowing this – you may be able to out pedal an incoming mutt as long as you see it coming. It it surprises you from the bushes than you’re out of luck. If you decide to out sprint the dog you’ll want to make sure you’re in the flats and a hill isn’t on the horizon. The dog will definitely catch you on an uphill.

Tips to Protect Yourself from a Dog

Many dogs are territorial, and have a zone that they considers as theirs. A yard, a part of the street, or maybe the sidewalk. The good news is that once you leave their territory most dogs will lose interest and walk back home. In the unfortunate case that a dog does chase you, here are some tips to protect yourself.

Dismount from your bike and yell, “Bad dog! Stop that! No! Go Home!” If you do this in a loud, confident voice the dog may decide to stop its chase.

Don’t go for the sprint, but stop. Sometimes by stopping the chase, the dog will also stop. This will give you the chance to slowly walk away. While sprinting away from an oncoming dog can be exciting (or scary), usually by getting off your bike the dog will stop the pursuit.

Keep a dog training whistle on you. Give that thing a blow and many dogs will stop as soon as they hear it. You can see one on Amazon here.

Dismount from your bike, and use it as obstacle if the canine attacks. You don’t want to get bit, and keeping the bike between you and the dog can protect you.

Don’t ever turn your back towards a dog. Dogs can sense fear, and will attack the rear or side. Square off towards the dog and face it. This will show the dog you’re not to be messed with.

If dogs are a consistent problem every time you cycle, than you may want to consider carrying animal deterrent spray (similar to pepper spray or mace). This is created to not injure or harm the animal, but force them to retreat. The spray can be sprayed up to 12 feet away. One user said that he had to use this product, and the dog’s reaction was confusion and a quick retreat. Don’t worry this won’t permanently damage the dog, but will only keep you safe. See on Amazon here.

If its a single dog every single time, you could photograph the dog and try to contact the owners. Most dog owners don’t want their pet chasing down strangers. Nor do they want their precious dog to bite someone. Perhaps, knocking on the door and letting them know will get them to a better job of containing their dog. If the dog continues to be an issue, you can take a photograph and see a complaint to the police.

Spray water from your bottle on it. You won’t have the best aim or distance, but spraying water at a dog’s face can cause it to retreat.

Give it a treat. If you have some snacks on you, you can toss the dog a treat and talk calmly to it. This can change its demeanor very quickly. If the animal is more playful than aggressive, than kind words and a snack will stop the threat immediately.

What to Do if Attacked

If you’ve tried everything, and the dog attacks and takes you to the ground. According to dog experts, you will want to roll up into a ball. Bend your knees up towards your chest, and try to get into the smallest ball you can. Place your hands around your neck, and pull yourself into the tightest ball you can and just hold still.

How to Handle a Dog Bite

It was the 1950’s and my father was riding his bike on his dad’s farm. Out of nowhere, a neighbor dog broke into a sprint right in his direction. It looked angry, and was barking with teeth bared. My dad was young, and didn’t want to be attacked and so he took off on his bike praying that he could out sprint the animal. Unfortunately, the dog caught up and bit him right in the calf of his leg. This stopped my dad, and he quickly got off the bike. He yelled at the dog, and it put its tail between its legs and took off.

I hope you never get bit by a dog, but if you do you’ll want to follow these steps to ensure it heals properly.

Plan Ahead of Time

No one expects for a dog to chase after them while they’re on a bicycle ride. This is why you should plan ahead to what you’ll do if a dog starts running towards you while you’re cycling.

You’re entitled to your own opinion – but in my experience, most of the time you don’t want to outrun the dog by sprinting as fast as you can. If it’s a small dog, and I can guarantee that I pedal faster than it runs then I’ll take off. But if a mid to large size dog starts running at me, I’ll be getting off my bike. Once there’s nothing to chase, the dog usually loses interest.

I hope this article has you thinking about what you’ll do in a situation that involves you riding a bike and a dog running after you. I hope the tips presented in this article help you to plan ahead, and keep you safe, happy, and cycling.