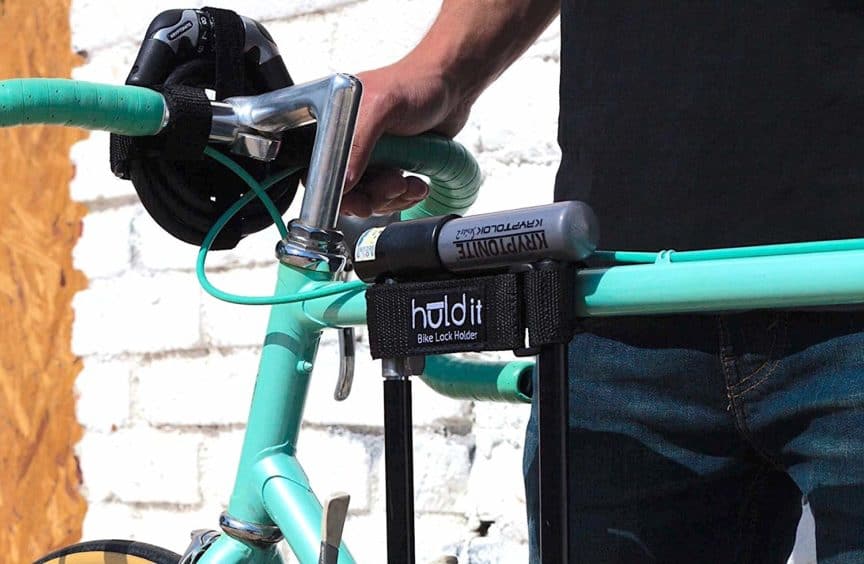 Unfortunately bikes are easily stolen. If they’re not locked down than anyone can jump on the saddle and pedal away. I once witnessed a woman cyclist sitting down at a bench eating a sandwich. Next to her was a beautiful road bike leaned against the bench. Out of nowhere a man snatched her bike, jumped on the seat, and jet away. He was gone in a flash. There was no way that anyone was going to be able to catch him on foot. The bike was gone. The poor woman was distraught as anyone in her position would be. Sadly, this is one of many bike theft stories and a good reminder that you should ALWAYS lock your bike when it’s not in use.

One of the best types of locks you can purchase to keep your bicycle secure is a u-lock. U-locks are sturdy, functional, and great at frustrating thieves. As a bike commuter you’ll want to be able to ride around town with your u-lock. Some people store their u-lock in panniers or a backpack, but many choose to attach the u-lock onto their bike. In this article, I will review the best u-lock bike mounts on the market so that you can easily carry your u-lock on your bicycle. 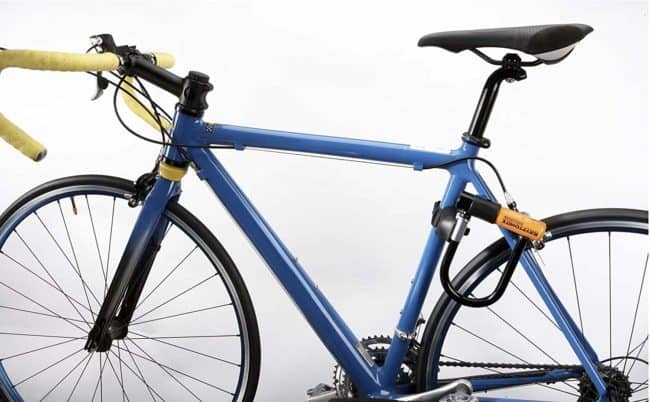 This u-lock bike mount is a simple, easy, and quick way to mount your u-lock onto your bicycle. In my opinion, if you’re looking to mount your u-lock to the bike this is the mounting system to get. To be fair there are some mediocre reviews of this system, but as long as you install it correctly you won’t have any issues with it.

This u-lock bike mount will fit any locks that have 13mm or 16mm shaped shackles. You can expect it to work with most of the common u-locks on the market. One of the unique features of this mount is that it allows for a 360 degree rotation to adjust the lock angle to best fit and align with your bicycle frame’s geometry.

It can mount to multiple locations on your bike frame too! Buy the Kryptonite Transit FlexFrame U-Bracket on Amazon

Kryptonite issued the video below to show how to install this u-bracket onto your bicycle. 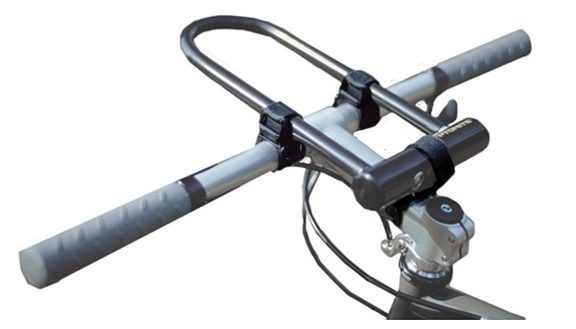 This USA made product utilizes three blocks that velcro onto your bicycle. These “blocks” act as anchors to hold your U-lock onto the bike. The manufacturer, TwoFish, recommends that you use their mounting system on your handlebars as seen above. If you’re in the “I don’t want my U-lock on the handlebars” camp than you’ll be pleased to know that you can use it to attach the u-lock to the side of your frame. Just use the top tube and seat tube for the three anchor spots.

The velcro is incredibly tight and secure, and your lock won’t wiggle around if you do it properly. This system works well with extra heavy u-locks.

The downside of this u-lock mount is that it takes a relatively long time to attach and remove the u-lock. You have to undo all three velcro spots to get the lock off and on. Obviously this doesn’t take forever, but if you’re getting on and off your bike a lot it can be a bit tiresome! Buy this U-lock mount system on Amazon. 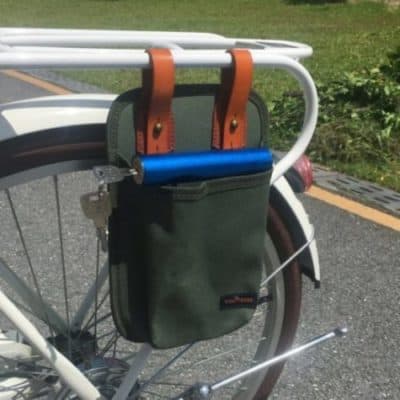 Here’s a different way to carry your u-lock while bicycling. This tote bag can be easily attached to a rack, the tubes of the main frame, the handlebars of bikes with high bars, and under your saddle (depending on seat height). It’s made of canvas and leather. It’s approximate dimensions are 6.69″ x 10.24″. This is a great way for bike commuters to bring their u-lock with them. It’s large enough to carry two u-locks. and can be used to carry other things as well. Because it’s a bag it is very easy to take the u-lock in and out for quick access. Buy the Tourbon Tote Bag on Amazon 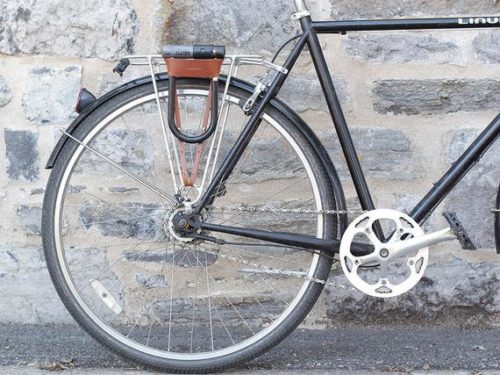 The U-lock holster is a unique method of safely carrying a bicycle lock while cycling. This holster can be attached to front basket, rear pannier racks, or even tucked behind your saddle. The leather holster absorbs any shocks from your ride so that your u-lock won’t rattle or make noise. This holster works with Kryptonight and other u-locks. It comes in tan, black, and brown. If you’re looking for a stylish way of carrying your u-lock this may be the choice for you. Buy the U-Lock Holster here 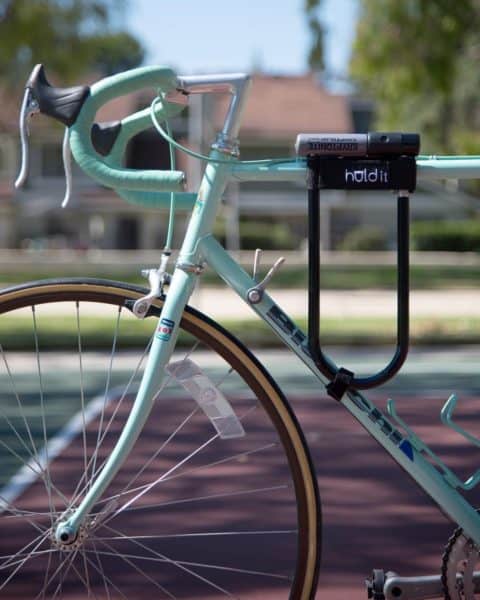 The Huldit is another u-lock bike mounting system that utilizes velcro straps. It’s a simple design, but it’s efficient and works well. The straps have soft rubber on the side that faces your frame to avoid scratching your frame and to prevent slippage. This bike lock holder works on a variety of u-locks including the New York Fahgettaboudit lock. You have the option to mount your u-lock wherever you want on the frame as long as it’s out of the way of any moving parts. Some people chose to attach to the top tube and others prefer the seat tube.

Huldit created a short film on how to install this system onto your bicycle. You can view it here. If you’d like to purchase this u-lock holder, click here to buy at Amazon.

Where are the best places to attach my U-lock bike mount?

Top Tube – One of the best places to attach a u-lock. It’s out of the way and is great for those cyclists who are minimalists. No racks needed for this attachment.

Handlebars – Not my favorite spot to place a u-lock, because I want the handlebars to be as free from clutter as possible. If you ride with a bell and a light attached to your handlebars than this will only take up more space. I’ve seen bike commuters with this setup and it’s possible, but in my opinion not ideal.

Seat Tube – Another prime spot to place your u-lock. If you choose to install a u-lock bike mount to the seat tube you’ll want to make sure that the u-lock is out of the way from your legs and pedal. You don’t want to catch while riding.

Under the Saddle – Not every bike has a seat high enough to allow for a u-lock to fit under it. If you have a seat that rides high than you have the option to place a u-lock under it.

Racks – An easy location to attach a u-lock if you’re bike setup includes a front or rear rack.

Down Tube – The only reason you don’t often see u-locks attached to the down tube is that there’s usually a water bottle cage in this spot. If your downtube space is available than this could be the right location for you!