Rust can absolutely destroy your bicycle so that is unusable.

When corrosive materials and oxygen interact with metal it can cause a chemical breakdown that we call rust. Water, salt, and other materials can cause any exposed metal on your bike to rust.

Rust can quickly spread and eat away at metal, and do permanent damage unless you take measures against it. Fortunately, there are things you can do to help prevent your bike from rusting.

How do you prevent a bike from rusting? Keep your bicycle dry. Water will cause your bike to rust, and so make sure to dry the bike off before storing it it got wet. Secondly, use a lubricant to keep bike parts lubed and oiled. Lastly, if you are regularly storing your bike outside you should invest in a bike cover to protect it from the elements. These three steps can keep your bike from rusting.

No one wants their bicycle to be ruined from rust, but it can happen if you don’t take the steps to prevent rust. If you have parts of your bike that are fully corroded than it’s time to replace them.

A rusted bike can be dangerous to ride on. In the remainder of this article, I’ll give more details into how to keep your bike from rusting AND how to remove rust if it appears. 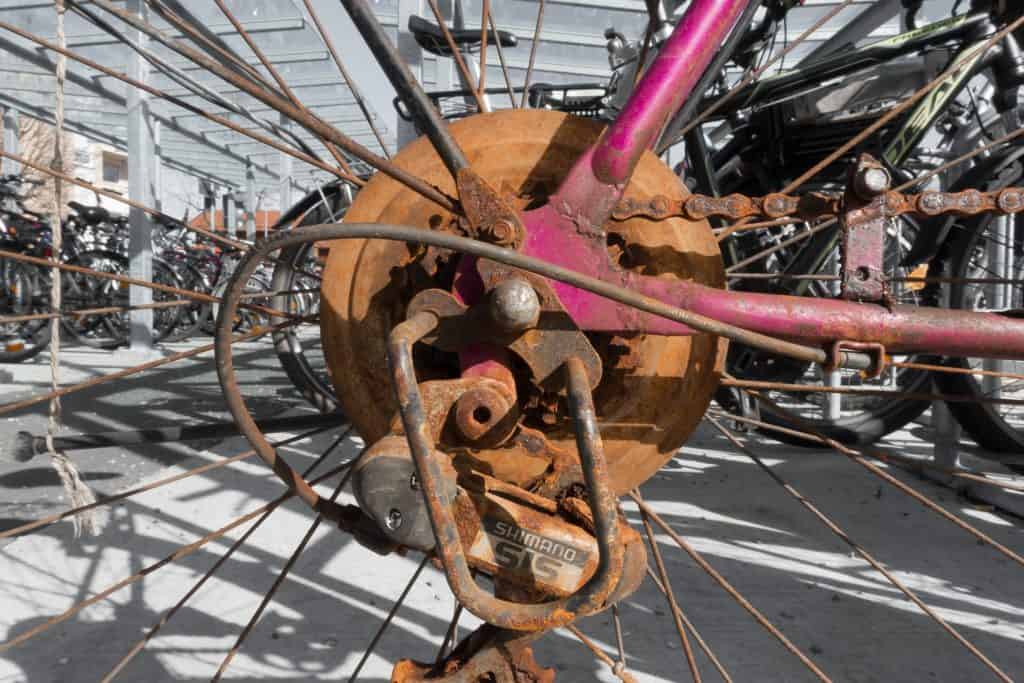 The technical term for rust is iron oxide, and it is formed when iron and oxygen react in the presence of water or moisture in the air.

One of the best ways to prevent your bicycle from rusting is to keep it nice and dry. If you just went on a rainy day ride or you pedaled through puddles than you should spend time drying off the entire bike before you store it.

A bicycle that is wet is much more likely to rust. I know that feeling after a long ride where it would be convenient to store your bike without giving it a wipe down, but don’t give in!

Take the time to wipe it dry before you put it away.

Keep Your Bike Oiled and Lubricated

As a bicycle owner, you should always have a supply of bike lubricant. Lubricant will act as a barrier between the elements and the metal on your bike.

As long as there’s a layer of lubricant on exposed metal, your bike chain, etc., than it should not rust.

You want to keep your bicycle parts oiled and lubricated as this will prevent rust from occurring. Make sure to apply lubricant to the the derailleur, chain, nuts, bolts, basically anything that is exposed metal.

Make sure you’re using a bicycle lubricant and not a degreaser as these are two different products. Personally I use Finish Line Bike Lubricant as it seems to go a long way, doesn’t attract grime, and is cheap. You can check it out on Amazon.

Keep Your Bike Covered if Outside

Leaving your bicycle outside all the time will increase the chances of your bike rusting. Ideally we would all want to be able to store out bikes inside when they’re not in use, but we know this isn’t an option for everyone.

Depending on the climate of where you live will determine how quickly your bike will corrode. If you live in an area that rains or snows a lot or has humidity there’s a good chance that your bike will begin to rust given enough time outside.

Rust can cause parts to seize up and the gears and chain won’t be as smooth. If the frame begins to rust it will lose its structural strength.

If you’re planning on leaving your bike outside at night than I would highly recommend getting a bike cover (or tarp) to place over your bike.

You need a cover that is big enough to keep moisture, fog, snow or rain from getting on your bike. A nice cover will keep your bike dry.

As a bonus – it can keep the sun off your bike too which can cause the coloring on bicycles to fade and any plastic pieces to become brittle. I wrote a piece on a few different bike covers that you can check out. 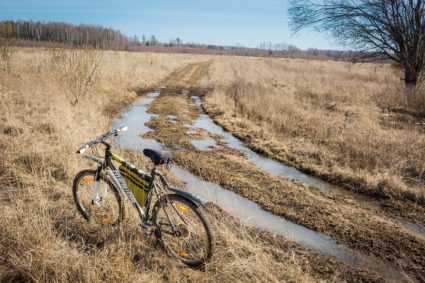 Dirt, soil, and mud can help rust begin on your bicycle. If you’re bike is getting dirty from riding than take the time to give it a quick wipe down to remove any dirt from it.

It’s good to give your bike a cleaning every 25 rides or so, and a deep clean twice a year. If you’re an avid cyclist and you’re worried about rust you should lubricate your chain once a month.

The Two Steps to Removing Rust

Unfortunately, we all slip up with the preventative measures and rust can appear on our bike.

The good news is that if you notice rust on your bike early enough, you can remove it and reduce the risk of the rust growing. Here are three steps to removing rust from your bicycle.

The first thing you want to do is completely remove any rust on your bike. Use a steel wool pad, sand paper, or a bristle brush to rub off any areas on your bike that have rust.

Rust is like cancer and will spread once it starts. By removing rust you’ll be able to keep your bike’s metal from further rusting.

Now that the rust is gone you’ll need to paint over the area or the rust will surely come back. A cover of paint will prevent oxidation from occurring which leads to rust.

Finger nail polish paint or a touch up paint will do the trick. If you’re doing this to your bike frame than you’ll want to make sure you have a paint that’s close to the color of the frame unless you’re going for a more abstract look.

Cover the affected area with the paste, and allow it to sit for 15 minutes.

After 15 minute minutes take a scrub pad or toothbrush and scrub at the area. Give it a good scrub and than you can leave it sit for another 15 minutes.

After this time you can wipe away the paste, and the rust should be gone. This method is best for lightly rusted areas and not severe cases of rust. 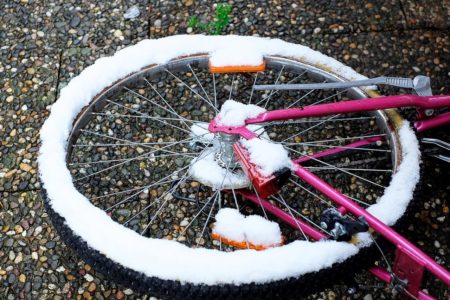 Is it OK to store bikes outside? As mentioned it’s not preferred. Leaving your bike outside in the elements will increase the chances of it getting rust and corroding. If at all possible find a place to store your bicycle inside. If you’re unable, you should look into purchasing a bike cover as advised above.

Can you use WD-40 on a bike? Yes, but only if it’s the right kind. Basic WD-40 is primarily a solvent and a light lubricant, and is not the best to use for lubricating you bike parts and chain. If you’re worried about rust than you should make sure that you are using an actual bike lubricant. WD-40 the company makes a lubricant that is specifically for bicycles that can be used. Just make sure you have the right kind.

Is it bad to wash your bike with water? Not at all. Water and a gentle cleanser are great to wash your bike. In fact, giving your bike a good clean to remove dirt will help prevent your bike from rust. You should be cautious to not use a high pressured, because it can force water into areas of your bike (such as sealed bearings) that you won’t be able to dry. Water is fine to use as long as you make sure you’re able to dry it all off before storing your bike. If you’re looking for the best storage solutions, then check out my article here about the best bicycle lifts on the market..

Is it bad to ride your bike in the rain? No. In fact, if you prepare for riding in the rain it can be a lot of fun. Riding in the rain will not cause your bike to immediately burst into rust and start corroding. What would be bad is if you rode your bicycle in the rain, but didn’t take the time to wipe off the water when you were done. It takes time for rust to occur on your bike, and a single rainy day ride won’t cause rust as long as you dry your bike afterwards.