There are a variety of reasons why you may be considering commuting to work on your bike.

Perhaps you’d like to save gas money? Maybe the idea of getting exercise on the way to work is enticing?

There are many people who bike to work because they want to do their part to reduce carbon emissions. If you’ve been dreaming about commuting to work on a bicycle you may be asking yourself, “how far is too far to bike to work?” 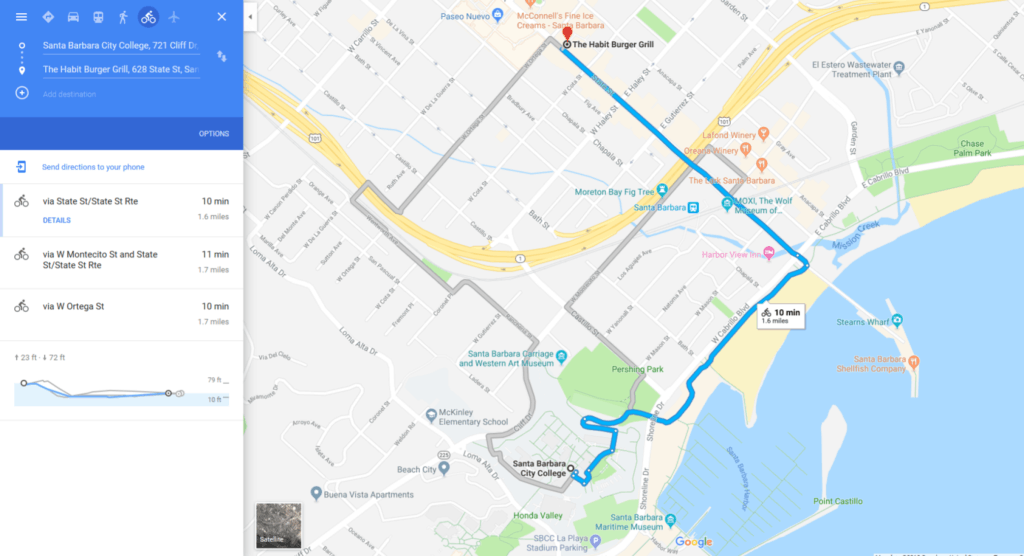 5-10 miles is a reasonable distance to bike to work. Depending on the route it should take 30 to 60 minutes to ride to work.

With this said, bike commuters may disagree with our answer. To be honest – there is no right answer to this question. The way that you answer this question depends on the following criteria:

Based on our personal experience, talking with other cyclists, and research we came up with the following chart to help decipher what distance you are comfortable with.

We are aware that this isn’t always the case, because we know bike commuters who can get to work quicker because they can skip past car traffic. With this said, you’ll need to ask yourself whether you have the margin in your schedule to ride your bicycle to work if it takes longer than driving.

My old job was about 5 1/2 miles from my apartment.

In the mornings it would take approximately 30 minutes for me to get to work riding my bike. Driving in a car would have taken me around 13 minutes.

The bike commute to work had a fair amount of uphill to pedal through, and so it was important that I set enough time in the mornings to ride to work. The nice thing is that on the way home it would take me closer to twenty minutes to get home.

You will want to make sure that you have enough time in the morning to get to work by bike, and also enough time after work.

There may be particular days where there isn’t enough margin in the morning/evening, and you’ll need to skip on the bike commute. My wife bicycles to her job about half of the work week.

On the days she doesn’t bike commute it’s usually because she needs to be home quickly after work.

We’re recommending 5 to 10 miles for a commute, because round trip won’t take too much time out of your day. Bicycling 15, 20, or 30 plus miles is going to take a significant amount of time.

For some bike commuters time isn’t an issue, but for us it was too much of a time sink.

Our recommendation to you is to do a test commute. Pull out your bike and pedal to work while timing yourself. Don’t try to set any Olympic records, but ride as you would if you were heading to work.

Wear the clothes you would be wearing on the bike commute and ride to your work location and back. This will give you a good idea of how much time it will take to commute.

If you’re looking for the right app for the job we would recommend Strava. Strava is easy to use and allows you to record the distance and time of your bike rides. This application can be downloaded on your phone and is completely free.

Experienced cyclists who have a higher fitness level have the capacity to go faster for a longer duration.

It’s not a big surprise that the bike commuter who is fit is going to be able to handle their commute at a faster pace than the individual who hasn’t exercised in awhile.

If you’re an avid cyclist or exceptionally fit – the chart above may be inaccurate for you. A ‘hard’ bicycle commute for some may be moderate or easy for you. If you’re asking ‘how far is too far to bike to work?’ and have a low fitness level a 11-15 mile commute may be too difficult for you.

With this said if you consistently commute by bike you’ll slowly get in better shape. Over the course of weeks you will notice that the time it takes to ride to work will become faster and faster.

I used to get off work late at night from a job and I would try to beat my personal record biking home. My personal best time got faster and faster as I my fitness rose.

For those of you who don’t consider yourself “fit” I would encourage you to try commuting to work by bike!

Don’t let your fitness level stop you or be an excuse for not riding to work.

Trust us – you’ll be glad that you started.  Cycling is great for your health, and before you know it you’ll not only feel healthier, but you’ll be in better shape. 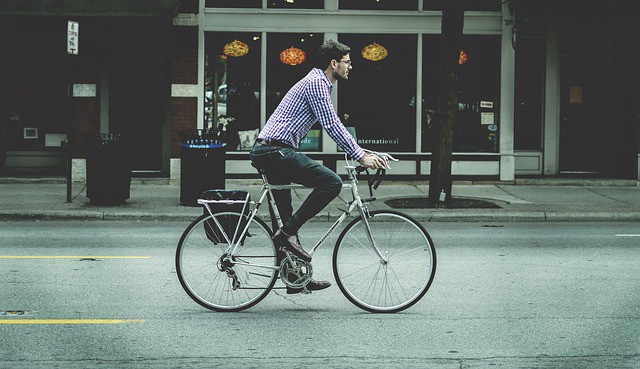 One of the reasons this question it is difficult to answer ‘how far is too far to bike to work?’ is because we don’t know what your commute looks like.

Are you dealing with traffic?

Is there a bicycle path?

Will there be lots of elevation on the commute?

You will fly to work if you’ve got a tailwind pushing you along on a relatively flat commute. On the other hand if you’re riding into a headwind or have to climb a decent hill you’ll be slowed down.

A bicycle commuter shared that he had a 15 mile commute one way. Depending on the weather and wind his commute would range from 45 to 75 minutes. Once again distance isn’t the only variable in answering the question.

This is another reason why we would suggest that you do a test ride to time your commute, and get a feel for the route you’ll take.

Are you ok with sweating on the ride?

If you have ever told anyone that you commute to work by bike you’ve probably been asked, “How do you deal with the sweat?”

Sweat can most definitely occur while biking to work, and you should have a plan in place to deal with it. We won’t go into all the details here, but there are ways to freshen up after a bike commute (shower, extra clothes).

You will need to make a decision over whether you’re ok with sweating on your bike commute or not.

Once again my wife rides her bike about 3 miles to work and doesn’t work up a sweat on her short ride. She pedals leisurely, and shows up to work smelling fresh and feeling good.

For her she would not commute by bike if it meant that she was going to be completely sweaty. For myself (I have a shower at work) it’s not a problem to clean up.

The bike commute distance that works for you will be dependent on if you are fine with sweating on the ride.

What type of bicycle will you be commuting on?

We don’t believe that you need the greatest and newest bike on the market to commute to work. In fact, many ‘regular’ bikes will work just fine.

A commuter bike should be three things. First, it should fit your size. Riding a bicycle that is too small or big for you won’t be efficient or practical.

The second important characteristic of a commuter bicycle connects to the first and that is it should be comfortable.

An uncomfortable bicycle will not work. Yes – you could ride it to work, but we doubt that you’ll continue to commute by bicycle if its miserably uncomfortable. Our third thing is that you shouldn’t purchase a cheap, heavy, Wal-Mart bike.

Invest in a bicycle that is comfortable, fits you, and isn’t too heavy. You could purchase a new bike at your local bike shop or online, but we would recommend spending less and getting a used bike on Craigslist.

You can find a decent used bicycle for under $250.

Trust us – having the right bike will allow you to go farther of a distance when commuting to work.

In conclusion, how far is too far?

Factoring in the variables that we talked about above, you will need to answer this question for yourself.

For us we would say 5 to 10 miles is the sweet spot for a bicycle commute. It is far enough that we feel like we got a workout, but close enough that it isn’t taking hours to get to work.

Cycling to work is a true joy. It’s good for you physically, but we would argue mentally as well.

There is something nice about being outside and getting exercise before work. For me I also love being able to decompress on the bike commute home after a long day of work. Hopefully your bike commute distance isn’t too far and you too can enjoy riding to work.

If you enjoy your content in video form – check out this YouTube video that I personally made that answers the question “How Far is too far to Bike to Work?”

We hope that you have found this article helpful, and that you give it a go! Even if you think your  commute is too far for you, give it a test ride. Don’t give an excuse before you try it out. We think you’ll be glad that you at least tried. Happy riding!