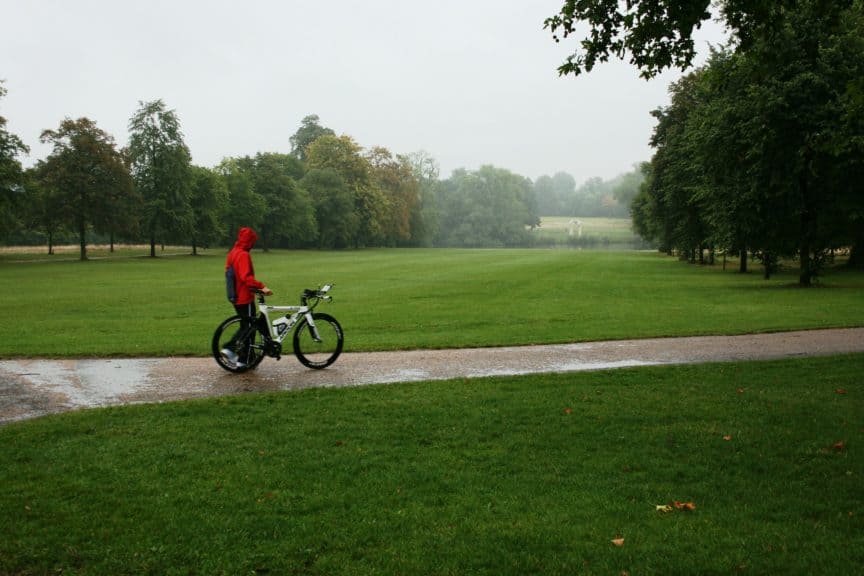 Picture this: it’s a Friday night, and a popular new restaurant downtown has just opened. All of your friends have decided to meet up after work for some drinks and food at the new restaurant, but you’ve got one dilemma: it’s starting to rain outside, and you need to take your electric bike to get to the restaurant. You begin to wonder…

We’ve researched and compiled all the facts and tips you need to know about using electric bikes in the rain, so you never have to miss a Friday night dinner with friends – even when the weather isn’t necessarily cooperating.

Using Electric Bikes in the Rain

There are some extra precautions you may need to take before and during a rain shower.  Also, there are some key things to know about electric bikes to use them safely in the rain.

Before we get into the specifics of why and how electric bikes can get wet in the rain, and ways you can safely ride your electric bike when it’s rainy outside, let’s take a look at some basic information about electric bikes – like how they work, and how you can tell which ones are best suited for use in areas where it frequently rains.

The Basics of Electric Bikes

When you think of electric bikes, the first thing that might come to mind is something along the lines of a motorcycle or moped. While those things can both be electric, they’re not electric bikes – and electric bikes look a lot different.

Electric bikes are essentially regular bicycles with a few extra electrical components, like a controller, a battery and a motor.

How do they work, though?

Electric bikes are operated the same way standard bicycles are–by good, old fashioned pedals, handlebars, and brakes. The difference is that, of course, electric bikes have electric components; the electrical components on electric bikes build on the human power it takes to operate a bike (rather than replacing it, like a motorcycle or moped would).

There are different types of motors, batteries, and controllers for electric bikes that we won’t get into here, but those different parts can make a world of difference when it comes to riding electric bikes in the rain.

The most important thing to know about electric bikes (when it comes to riding in the rain) is where all your electrical components are located. When you know where parts like your motor, battery, and controller are located, you can aim to protect them from water damage. Let’s talk about why.

Using Your Electric Bike in the Rain

It’s important to know your electric bike and where its parts are located, especially the electrical components. Why? What else should you know about operating an electric bike in the rain?

First things first, electric bikes are water resistant, not waterproof. They can get wet.

On the other hand, when a product is water resistant, that means it’s difficult for water to get in, but not impossible – and if water does get in, it can cause damage.

For example, let’s think about smartphones and other electronics. When you’re using your phone and step out in the rain, do you immediately put your phone away for fear of it getting water damage?  Probably not, since most phones are water resistant.

However, you wouldn’t want to drop and leave your phone in a puddle, or a pool, or another body of water for a long time.  You know that doing so could damage your phone beyond repair.

Okay, so electric bikes can withstand some water and be just fine. But how much can they handle? How can you tell just how water resistant your electric bike is? There’s actually an easy way to find out.

Figuring Out How Water Resistant an Electric Bike Is

When it comes to electrical enclosures and mechanical casings (i.e., those things that enclose the electric parts of your electric bike), there’s a rating system called the International Protection code, or the IP code.

You’ll need to know how to read and interpret an IP rating, though, in order for it to make any sense.

IP ratings have a standard format: the letters IP followed by two numbers. For example, an IP number may be “IP32.”

The IP ratings of your electric bike’s components are significant–they’ll tell you just how much rain and water your electric bike can handle, and they’ll also show you how much protection is offered against other things, like dust and hard objects.

Most IP ratings of electric bikes and their electrical components can be found online, by calling the manufacturer, or by asking a sales expert before buying. Once you find out what the IP ratings are, you can begin to interpret them.

The DSMT has in depth charts on interpreting IP ratings, so you know exactly what each number represents and how much protection is offered. Let’s check out some simplified versions of those charts.

The Higher the IP Rating, the More Water Resistant the Bike

If you’ve already got an electric bike, you can see how protected your bike’s electrical components are against solid objects and liquids.

If you’re looking into buying an electric bike but haven’t yet, and live somewhere in which you anticipate a lot of rainy riding days, look into getting a bike with a higher IP rating.

Whenever you get confused (it happens) refer to the charts, and you’re good to go!

Tips for Using Your Electric Bike in the Rain

By now, you know that electric bikes can be used in the rain, and you know how to figure out just how much an electric bike can handle when it comes to water.

Get the Right Electric Bike for Your Climate

This tip is for those who haven’t yet purchased an electric bike. As we previously mentioned, if you live somewhere in which you anticipate a lot of rain, you’ll want to make sure to get an electric bike with a higher IP rating – that is, an electric bike that can withstand more water.

These are all questions you should take into consideration before purchasing an electric bike. Once you’ve considered how much rain you’ll experience and how often you plan on riding your electric bike in the rain, you can buy a bike that can better withstand water.

There’s plenty of electric bicycles that are rated for a variety of climates and some that can even be ridden in the snow!

Weatherproof Yourself and Your Belongings

Humans are pretty water resistant, too, but when you add in other factors, like cold and wind, you can come up with a pretty dangerous cocktail that can increase the likelihood of an accident!

When you plan on riding your electric bike in the rain, wear layers so you can shed a few if you get too warm and add more if you get chilled. Evelo Electric Bicycles recommends getting a reliable cycling cap, a pair of water-resistant gloves, and a nice water-resistant jacket.

Your other belongings might be water-resistant, but you’ll likely want to weatherproof those, too, so they don’t get too much water exposure while you’re riding in the rain.

Seam-sealed waterproof pannier bags, backpacks, and shoulder bags are great for keeping your belongings like your phone, laptop, and daily purchases out of the elements. It can also be a good idea to keep some Ziploc bags on hand, just in case.

Check All Your Rubber Port Seals Before Leaving

If it’s a rainy day and you’re planning on riding your electric bike, make sure to check that all the rubber port seals on your bike are properly on, sealed, and not loose.

This can help ensure that water doesn’t get where it shouldn’t be on your bike’s electric components and gives you an extra level of protection from any water damage.

However, that doesn’t mean you should go plowing through big puddles, taking your electric bike out in a downpour, or going mudding. You’re on a bike, not a submarine, remember?

As we mentioned, no electric bike is waterproof, only water resistant, so it’s important to avoid taking your electric bike in excessive amounts of water!

There are a few ways to do this. First, you can use dielectric grease. Dielectric grease, also called tune-up grease, is a silicone-based grease that repels water and ultimately protects electric connections from water.

To utilize dielectric grease for your electric bike, you’ll simply need to follow the manufacturer’s instructions to apply the grease to your bike’s electrical contact points.

After you’ve used your electric bike in the rain, it’s always a great idea to wipe the entire thing down and dry it off (especially the electrical components) before storing it.

Don’t let your electric bike just air dry after using it in the rain; make sure to manually wipe it down and dry it with a towel or something similar.

Not only will this ensure water doesn’t get into the electric parts of your bike, but it will also increase the longevity of your bike. Win-win!

Other Tips for Riding an Electric Bike in the Rain

Lastly, there are some additional tips for safely and correctly using your e-bike in the rain. They are:

Electric bike users have often wondered if they need to store their bikes away and use another mode of transportation when it’s raining. Luckily for them, the answer is no! Electric bikes are water resistant and can be used in the rain.

When you’re properly educated on electric bikes and the amount of water they can withstand, you can use your electric bike on just about any day – rain or shine!