For years I’ve been cleaning, repairing, and working on my bicycles without a stand. I kept telling myself that I didn’t need a repair stand. It wasn’t absolutely necessary, and I could make due without.

And truthfully, I did for many years. I’d flip the bike upside down balancing it on the saddle and handlebars. When cleaning the chain I would have to lift the back tire off the ground with one hand, and pedal the crank with the other. It wasn’t easy, but I made it work.

Than awhile ago I got an old Trek mountain bike for free from a family friend. It was well weathered and needed some tender loving care.

One of the main problems is that it needed new brake cabling that I would need to install. The more I thought about it the more I decided it would be time to get a bike repair stand. Researching online and asking other bicyclists questions I began to search for a stand that worked well and was in my budget.

I came across the Bikehand Bike Repair Stand (see on Amazon), and started reading through the reviews. It received mostly positive reviews with a few less stellar ones. Overall, it seemed like a good price and would get the job done. So I purchased it. Here’s my review of the bikehand repair stand after assembly and using it to tune up some bikes. 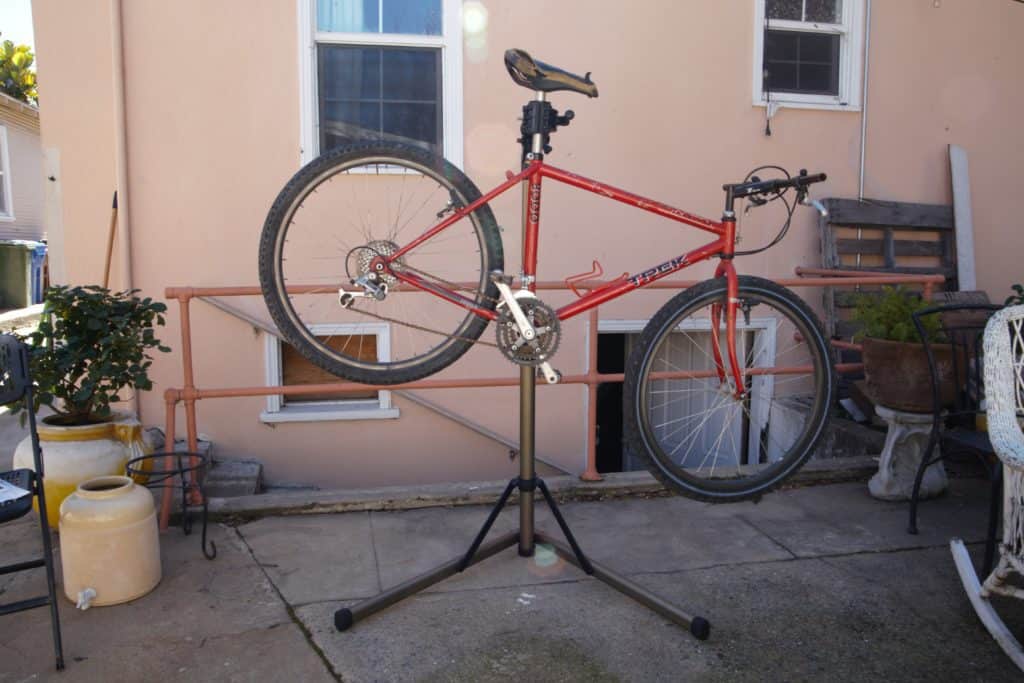 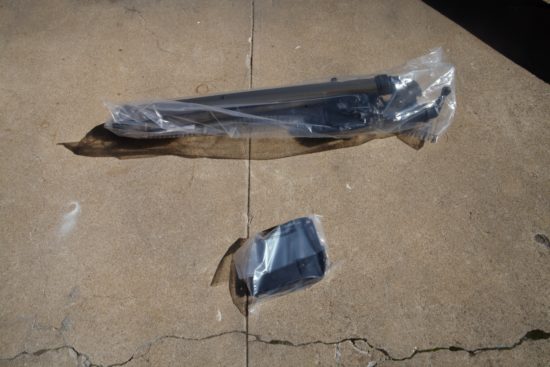 I opened the box it came in, and this is what you see. Two plastic wrapped objects. One is the actual stand which will expand, and the smaller one is the tool tray. 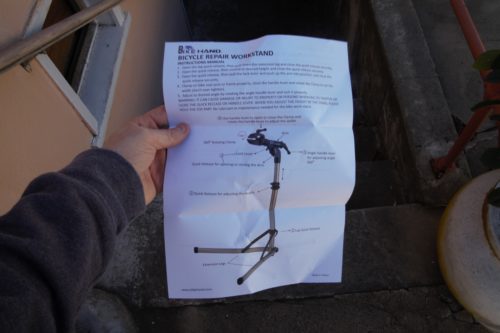 It also comes with these standard instructions. Setting the stand up takes a matter of minutes. You’ll need to set down the the legs, and tighten them with a quick release lever on the back.

The only confusing part of setting up the stand was the tool tray. I wasn’t exactly sure what it was at first, because when I didn’t know it had that feature when I purchased it. 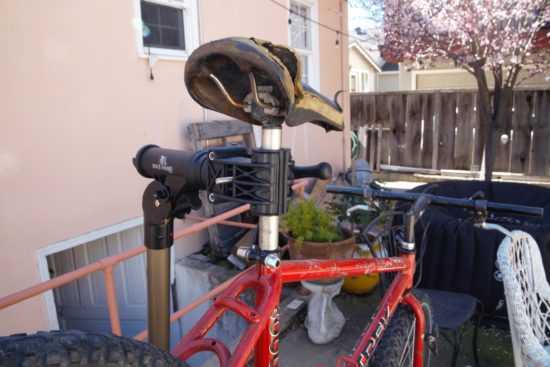 Once it was fully assembled I mounted my bike on the stand to start tinkering, and testing out the stand.

The Details on the Bikehand Stand 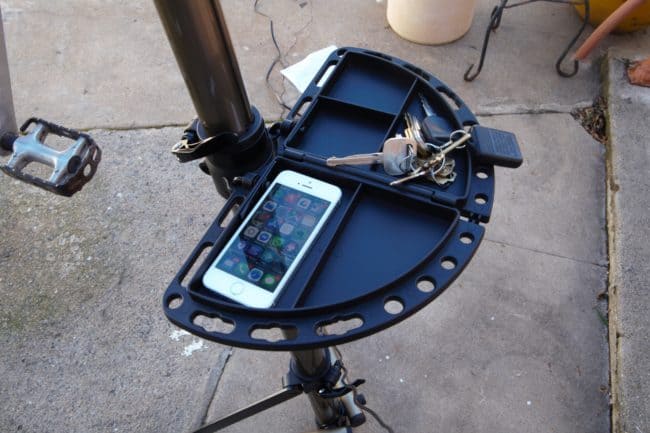 The Stuff I liked about this Stand

As I said above, this stand is practically ready to go out of the box. If you’re quick you can have it up and ready for a bike within 40 seconds. Everything from the quick releases to the clamps are very intuitive and are easy to use.

I currently rent a place without a garage, and am unable to keep a bike repair stand up all day. I love that I can pull this out of storage when it’s needed, and than break it down to be stored when I’m done. The portability and its ability to fold into a compact shape is a huge positive trait.

While you may be worried about it’s sturdiness I found it to be very sturdy. The clamps are made of a plastic alloy, but are strong. In addition, the two leg design is enough to keep it grounded. I wouldn’t worry about knocking it over unless you had a very heavy bike and were forcing it back. You can also adjust the stand with a bike on it so that the front tire touches the ground to give added stability, and prevent the front wheel from moving.

The clamping system allows you to mount a bike by the seatpost, bottom tube, or top tube.

The tool tray is a nice bonus. How many times have I taken a small bit off my bike and set it on the ground or put it in my pocket only to wonder a few minutes later where I placed it? Too many times. Tools and parts can sit safely on this tray.

The clamps come with quick release handles that have a bolt on the opposite side. You can make sure that the bike stand won’t slip or sag by tightening the bolt before using the quick release. Unless something on this stand physically breaks it will not sag at all. 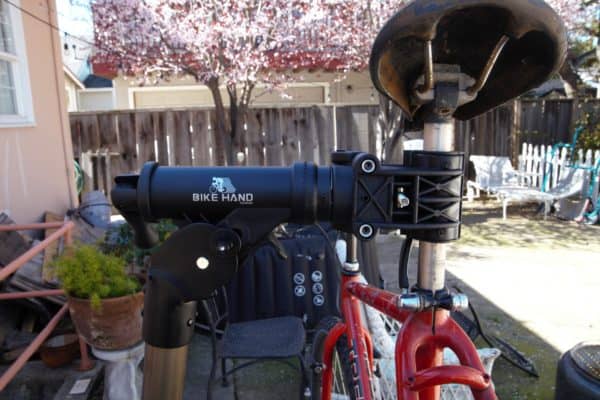 What Could Be Better

I like to attach my bike to the repair stand primarily by the seat post. The clamp that holds this tube is difficult to secure, because the lever that tightens the clamp is right under the bike saddle.

The workaround to properly tighten the clamp is to hold the bike up while I turned the lever a couple times before clamping down. Not the worst problem, but a design flaw that requires a slight annoyance.

If you look at the photo above you can see the clamp jaw rotation lock. The teeth are directly in the middle of the photo. I don’t have any current complaints about the plastic teeth, because it has held tightly and allowed me to angle my bikes exactly how I want.

The one issue I do have is that I can see over time these plastic teeth wearing down, and slipping. Like I said this isn’t an issue that I have had to deal with, but I could see it happening in the future. Having these teeth be metal would increase the longevity of this product.

Thirdly, after a good amount of use I did find the stand to rock around while working on my bike. I wasn’t afraid that it would tip over, but it did seem to shuffle about. I fixed this by placing my foot on one of the legs to keep it stable. In addition, you could put a sand bag on a leg to keep it more grounded. 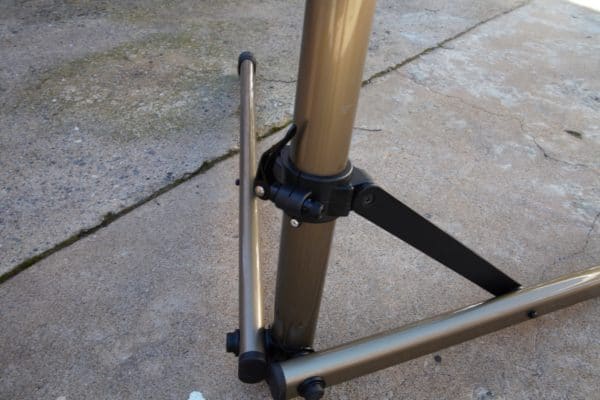 Is this Bike Repair Stand worth purchasing?

This bike repair stand isn’t the cheapest nor the most expensive. It’s a mid-range bike repair stand that after using I would say is worth every penny. A cheaper stand can’t deliver the sturdiness, strength, and quality.

With that said, this bike repair stand meets all of my needs. I could have spent twice as much money on a more expensive bike repair stand, but for only a small advantage. If you’re like me and wanting to do repairs or tune ups on your bike than you’ll be hard pressed to find a quality stand for a price like this. Overall, I’m very happy with my purchase.

You can get the BikeHand Bike Repair Stand on Amazon

link to Can A Mountain Bike Be Used On The Road? (Solved!)

Wintertime is my favorite, and there’s nothing quite like the beauty and serenity that cold weather brings. However, I’ve always struggled to enjoy it properly due to Seasonal Affective Disorder....