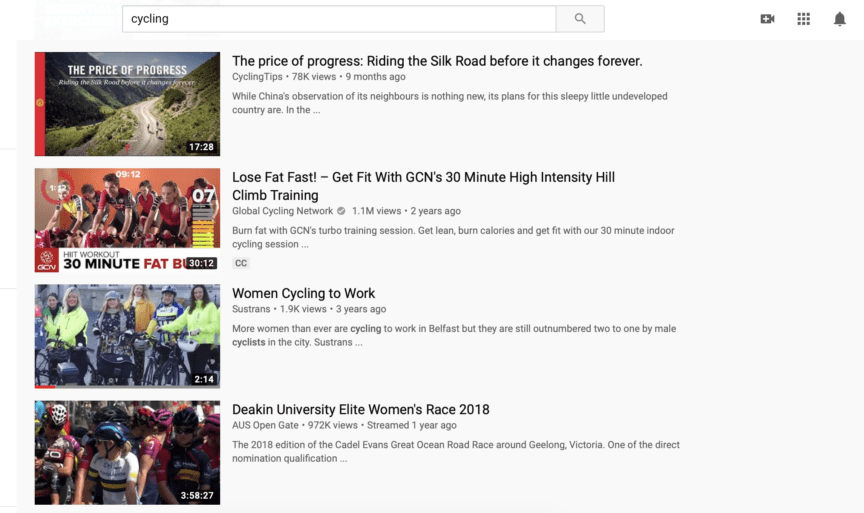 There’s plenty of YouTube channels related to bicycling. Here’s a list of the best cycling YouTube channels. There’s something for everyone regardless whether you’re into BMX, Mountain Biking, electric bikes, road cycling, and even unicycling. Enjoy this list! I hope you find a new channel to subscribe to.

If you’re into mountain bikes Seth’s Bike Hacks is arguably one of the best channels on YouTube. He keeps things lighthearted, but also interesting with his reviews, documentaries, goofs, and more. Great videos to watch for beginner and advanced riders.

It all started when Russ and Laura sold everything they had and rode their bikes across the United States and abroad. Since then, they have continued with their channel putting up tons of great content on bikes, camera gear, travel, and more!

Park Tool is a company that makes bike repair tools. In addition, they’ve created a comprehensive and incredibly useful channel detailing various bike repairs and maintenance techniques. This is the perfect YouTube channel if you’d like to learn how to work on your own bicycle.

Lance Armstrong is a controversial character in the cycling world, but he’s part of a fantastic podcast that gives great insight and perspective on the world’s most iconic cycling races including the Tour de France. WEDU is the video of the podcast with guests including George Hincapie, Mark Allen, Dave Scott, and more. Perfect companion to watch and listen during the Tour.

Is it wrong of me to suggest my own channel? It’s not the fanciest, but it has heart! Every week I publish a video related to bicycle commuting. Everything from tips, reviews, and inspiration to get you to give bike commuting a shot. Subscribe to my channel and you’ll be my new best friend.

GCN is the most popular cycling channel on YouTube. It’s polished and produced to the highest quality. You can expect videos covering races, highlighting the latest bike gear, and techniques to be a better rider.

Katie loves riding! Her videos range from yoga for cyclists to bike adventures. Make sure to check out her series as she rides through the North Coast of Scotland.

This is one of my favorite channels as Cruise (the creator) is entertaining as he rides around Japan. He’s a proponent of bike commuting, and you’ll get to see the Japanese landscape as he goes to work. In addition, there’s an assortment of other cycling related content. Plus every now and then there’s a video on life in Japan.

You can expect interviews with professional riders, cycling tips, product reviews and more. A good collection of videos answering questions such as “How does a breakaway work?” or “How much do pro cyclists get paid?”

He’s a cyclist and yes he is vegan, but it’s mostly about the cycling and less about the diet. Super well produced content of races, cycling techniques, rides with power overlays and vlogs from days at a race.

Anthony lives in New York City and loves to BMX. Even if you’re not into BMX riding he makes films that really draw you in. One of the most interesting videos is of him riding on top of 18 wheelers in the city. Fun to see him do tricks, but also fun to experience NYC through his videos.

Riding a bike doesn’t need to be complicated. It’s really quite simple. This is the approach of Ride on Cycling as it puts out reviews, advice on riding, and how to have a better mindset while training.

Take a chill ride with BikeBlogger as he cruises around. Filmed from the perspective of the rider you’ll get to see the various rides he takes. Nothing unique, but definitely relaxing watching him pedal around.

Scotty Cranmer is tied at 9 X Games medals with Dave Mirra. He’s a BMX rider with a succesful YouTube channel with over 1.5 million subscribers. Watch Scotty and friends ride BMX in skateparks, in the street, and have fun while doing it.

Ever since he’s a kid he has been taking things apart and putting them back together again. His channel has him talking apart fitness equipment, cars, but most importantly BICYCLES.

Spindatt is a regular dude making bike videos and vlogs. Good videos on Cyclocrosss, reviews of bikes, and a variety of bike builds.

Launched in 2007 and they’ve built a massive collection of cycling videos. You have your race reviews, your tips to become a better rider, and lots of footage of epic rides. Very polished YouTube channel

The purpose of the channel is in the name. Name a model of electric bike and it’s probably been reviewed on this channel.

Watch Alex live life to the full as he packs it with as much adventure and biking as possible. He lives in a van and travels around the United States to check out great mountain biking spots. Also a good amount of the channel is dedicated to him renovating his van.

Want to become a better mountain biker? Let Phil help you out! He’s got excellent videos that’ll be able to help beginners to advanced riders get better.

Curious what it’s like to descend 6,000 ft to the Mediterrean? Or ride through the Pyrenees of Spain? BKXC takes great footage with a chest cam to make you feel like you’re there. Except you’re sitting on the couch and not on a bike.

Fantastic, high level produced films by Francis Cade. He’s got a great personality which makes it enjoyable to watch. Not only is there lots of great cycling videos, but he even shows the lives of cyclists.

Kuba reviews various bicycles and bike products. While he makes an affiliate commission on the products that are sold it seems like he gives an unbiased review.

Mahalo My Dude is a group of friends from the West Coast of British Columbia who travel the world to film and ride mountain bikes. If you love bikes, cameras, music and good vibes you’ve found a new YouTube channel to subscribe too.

Kelsey loves riding bikes. She lives in New York City as an aspiring actress. Videos of her riding in cries, going on bikepacking adventures, and riding in the city.

inCycle follows the UCI cycling world tour with highlights, tour news, rider interviews, and behind the scenes with the teams.

A channel that distinguishes itself from the rest of cycling by focusing on velomobiles and recumbent bikes. If you’ve never seen a velomobile in person you’ll get your chance to see one on film here.

This is Ed and he’s riding his unicycle across the world! By this time he’s got to have the best balance a man can possibly have. He’s currently making his way across the United States.

Rob’s dedicated to testing out electric mountain bikes. Pretty wild how far the technology has come!