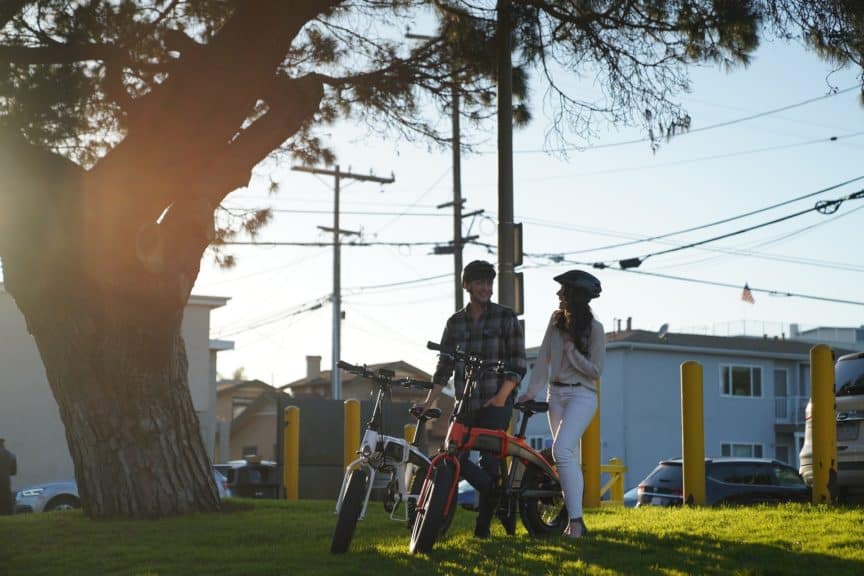 Electric bikes are spiking in popularity due to their ease of use and overall enjoyment while riding. They have multiple perks, like how you can ride faster than on a traditional bike. You also get more exercise than if you drove or commuted on the train. You will save money if you use it in cities rather than driving or paying for a train or subway pass.

However, are electric bikes fun? Yes! It is so much fun! Because it is electrically powered, your pedals go twice as fast as on a regular bike with half the effort. You will also save money riding to and from work every day. Plus, riding is great for your health and overall well-being. Commuting is a breeze, especially if you live in a city where there are bike lanes you can ride on.

This article will go into detail on why electric bikes are fun to ride and own. Given that people are wanting to commute to work more for their health as well as saving money, biking has become a great option. Not to mention all that you will do for the environment by reducing your carbon footprint. All with less effort than riding a regular bike!

Ride For Your Health!

Riding an electric bike will improve your health. Electric bikes will make you active and keep you moving while riding for fun or commuting to work. If you use it to commute to work, you can save money on gas and car bills. You also get more of a scenic view while you cycle, which can greatly improve your mood and motivation for the day.

The research shows that commuting cyclists have improved health compared to non-riding commuters. The study done by the British Medical Journal shows how cycling as a commuting method greatly decreases the chances of developing high mortality conditions such as cardiovascular disease or cancer. These statistics were compared to other commuting types, such as walking or non-active commuting (driving).

Health is improved for any kind of cycling. While the study mentioned above includes traditional bikes, electric bikes can be factored into those statistics due to it still being a way to cycle and move. While it may be less effort on your part, your heart rate is still elevated, and you are still exerting more work than you would be walking or sitting.

Any exercise is better than no exercise. That New York Times article goes into detail about how we, as a culture are getting less and less exercise for our health. This is leading more people becoming susceptible to diseases like diabetes and heart disease. While electric bikes may not put as much effort as regular ones, it still is beneficial to our health.

Commute To Where You Want To Go Fast!

Beat the traffic jams by riding your electric bike. If you tend to travel during rush hour or just live in a congested area, you may find that driving to work takes too much time. You’re better off walking! In those cases, an electric bike is the answer for you. You can ride on bike paths or lanes rather than deal with the congestion and get to work quicker.

Electric bikes pedal faster than traditional ones. Electric bikes can get up to 28mph depending on the class of bike. A standard bike can get up to 11mph, so you are doubling the speeds you can get up to while commuting to work. You’ll cover the distance in a shorter amount of time as well. A 12-mile trip can take an hour on a bike or 35 minutes on electric.

E-Bikes make climbing hills simple. One of the excuses I hear from people as to why they don’t want to bike commute is because there is a hill they’ll need to climb. They’re worried they don’t have the stamina to climb a hill on a bike. The good news is an e-bike will make hills EASY. Who cares if there’s a hill on your bike commute route? Just hit the throttle and you’ll get to the top.

Parking your bike is a breeze. You never have to worry about finding a parking space on an electric bike. You can lock it up on the many bike racks throughout any city. Many buildings also offer bike racks for those who wish to commute that way rather than driving it. This can also be a great way to save money since city parking can cost close to $30 per day.

Save Yourself Some Much-Needed Money!

You’ll save money on gas and car bills by commuting to work rather than driving. You won’t need to fill up a gas tank every week to get to work while riding your electric bike. Given that you can make a pretty long trip much quicker on one, you may find that you prefer the fresh air and soothing ride over the drive. Think of buying an e-bike as an investment. It might be a little costly at the start, but over time you’ll save lots of money compared to driving a vehicle.

You won’t need to buy bus fare. Riding the bus may not feel very expensive per ride; however, it can add up if you are taking it daily to and from work. That’s money that you won’t see again or use for other important things in your life. If you buy an electric bike and commute, however, you will save that money since it doesn’t cost you to ride to work.

You don’t need to buy monthly passes for the train. Similar to the bus fare, you also won’t need to pay for monthly passes to ride the train or subway to get everywhere. Your bike can take you where you need to go for free. You’ll make money back that you spent on the bike after riding to work for a couple months.

You Can Travel Further With Less Effort!

Since electric bikes pedal faster than traditional ones, you’ll travel further. This is great for those who want to commute to work but worry that the distance is too daunting to take on a traditional bike. You can make it work on an electric bike! Get those endorphins going with a relaxing ride before and after work. If you’re like me – few things are more fun than going fast. It’s so much fun going fast on an electric bicycle!

You’ll sweat less on an electric bike. Many commuters may not want to bike to work simply because they are worried, they will sweat too much. Sweating can leave anyone uncomfortable and hot, which will make working the regular 8-hour shift that much harder. You will only exert a portion of physical effort on an electric bike, so you’ll sweat less.

Save time on stopping to shower or change your clothes after biking to work. Since you won’t sweat as much on an electric bike, you won’t need to worry about making time to shower or change your clothes once you get to work. You’ll have all the health benefits of biking without the drawbacks. Also if you’re looking for more tips on how to deal with sweat while biking to work – check this article out here!

E-Bikes are Fun for People of All Ages

We’ve discussed why electric bikes are fun and useful for those who want to commute or enjoy the ride. Electric bikes offer the same health benefits of traditional riding without exerting as much effort or time. Plus, you will save money on gas or other commuting costs while riding your electric bike. Electric bikes will also get you to your destination faster!

And if you’re just thinking about getting an electric bike for the pure pleasure and fun of cruising around the neighborhood…you can’t go wrong with that earlier! E-bikes make it easier for a wider range of people to enjoy the great pastime of cycling.

For more information on electric bikes see this collection of articles.